Dear Jewish People:
We are together before the greatest and most important day of the year. Why? Because on this day we can correct our relationships between us, toward reality and the entire world. #YomKippur 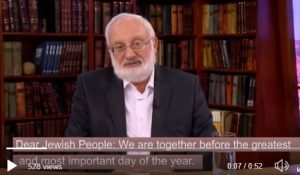 “What Forgiveness Should We Ask For On Yom Kippur?” (Times Of Israel)

The Times of Israel published my new article “What Forgiveness Should We Ask for on Yom Kippur?”

We Jews anger the Creator constantly, endlessly, and in every situation, when we agree to division and hatred among each other, and do not want to connect.

The Creator strongly desires for us to be united because from that force of connection, He will become revealed to humanity. By facilitating this action of connection, the Jewish people truly become a “light unto the nations,” and a conduit of peace and tranquility to all.

However, the opposite is currently happening.

Due to our alienation, we prevent all the goodness from spreading through us to the entire world. And because of our estrangement from one another, we need to ask for forgiveness this Yom Kippur (The Day of Atonement).

The Role of the Jewish People and Yom Kippur

A key part of the Yom Kippur prayer service is in reading the book of Jonah the Prophet. In the story, God orders Jonah to tell the people of Nineveh, who had become very abusive toward one another, to correct their relationships if they wanted to survive. However, Jonah evaded his mission. He took to the sea in an effort to escape God’s command.

Like Jonah, we Jews have been inadvertently avoiding our mission for the past 2,000 years. For this reason, we have suffered terribly. If we want to alleviate more suffering, especially today, in times of rising anti-Semitic tides, we simply cannot afford to keep remaining indifferent to the role we have to fulfill.

Yom Kippur, traditionally considered the holiest day of the Jewish calendar, is observed on the 10th of Tishrei. It is also known as the Day of Judgement. But who judges? And who is being judged?

It is the individual who judges himself. We are accustomed to examining our actions in the world, but we should also examine our intentions, especially with regard to others, like taking an X-ray of the heart’s intentions, checking to see how well we were able to rise above our egoistic self-interests to care for the needs and desires of others.

Why? It is because through such concern, we reveal the world for what it really is: a unified and interdependent system.

The role of the Jewish people, as explained by our sages, is to pave the way for unity above all differences as the only solution to all the evils in the world-–to serve as an example of unity for the rest of humanity. However, what do we see instead? We see deepening division and rejection of one another. Therefore, the nations of the world complain about our wrongdoing, despising us, punishing us and even desiring to annihilate us.

This hostility toward Jews is manifest in the spike of hate crimes worldwide, targeting Jewish victims for no reason other than religion. In Berlin alone, an average of two anti-Semitic incidents are reported daily, a total of 404 cases in 2019 (until April), as informed by the city’s commission for combating anti-Semitism. In New York City, violent attacks against Jews are spiraling out of control with anti-Semitic crimes up 82% this year, as compared to 2018, (a total of 152 cases so far, while over the same period last year, there were 93 incidents) according to the Police Department’s statistics.

Day by day, the multi-faceted sensation of instability in the world increases people’s need for calm and contentment. This increasingly causes sentiments of anti-Semitism to boil within humanity.

The wisdom of Kabbalah explains that hatred against Jews is triggered by our lack of desire to unite: among each other and with the Creator. When we are divided and reject one another, we block the passage of the force of love and connection through us to humanity. Then, humanity’s insistent demand for a better and more united life surfaces with force, inflicting us with blows.

“In such a generation, all the destructors among the Nations of the World raise their heads and wish primarily to destroy and to kill the Children of Israel, as it is written (Yevamot 63), ‘No calamity comes to the world but for Israel.’”
– Kabbalist Yehuda Ashlag, Introduction to the Book of Zohar.

Transforming a Mournful Day into a Happy One

Yom Kippur is the state where I reveal the egoistic force of separation within as something evil. After I discover it, I can then approach the Creator with this evil and demand correction from Him. This transforms the Day of Atonement into a day of joy because I discover the ailment for the evil within me, my selfish nature. In other words, I find how my ego needs to be corrected in order to fix my relationship with others, and that it is the cause of all division, conflict and crisis in the world.

People often consider Yom Kippur as a sad day because they do not realize that what is perceived as “bad” could be used as a springboard to attain good. What is regarded as good or evil depends entirely on one’s attitude. For example, if, during a routine visit to a doctor, one discovers that he has a disease, then the evil was revealed so that it could be treated and healed. This is an example of how the discovery of something bad in you turns out to be something good.

“There is no happier moment in a person’s life than when he discovers how absolutely powerless he is and loses faith in his own strength since he exerted all possible efforts that he was able to, but reached nothing. This is because precisely at this moment, during this state, he is ready for a complete and clear prayer to the Creator.”
– Kabbalist Yehuda Ashlag, Pri Hacham: Igrot Kodesh.

This moment is called a personal “Day Of Atonement.” From this moment on, a person can be certain of receiving the light of correction.

Our Entry to the Book of Life

I earnestly hope that we use Yom Kippur as an opportunity for introspection and realize the true reason for our suffering and the suffering of the world so that we will be able to fulfill the role that humanity expects from us:

“The Israeli nation had been constructed as a kind of gateway through which the sparks of purification will flow onto all of mankind throughout the world, until they can perceive the pleasantness and serenity that exist in the kernel of love of others.”
– Kabbalist Yehuda Ashlag, The Arvut (Mutual Guarantee).

May all the Jewish people lead by example and be inscribed and sealed in the Book of Life for a good year.
[253622]

Heaven And Hell Are Internal States

Question: During its development, the soul undergoes various transformations. From a religious point of view, heaven and hell are a certain stage of development of the soul. I would like to know what it means from a Kabbalistic point of view.

Answer: It is not what religions say.

Heaven is a state of joy of bestowal to others. Hell is the state when I literally burn with shame.

Hell is a feeling of shame. Heaven is satisfaction from love. But all of this is on a spiritual level. There is nothing else.

Answer: Shame occurs when you see how opposite you are to the Creator.

In Preface to the Wisdom of Kabbalah, we study that the first restriction (Tzimtzum Aleph) happened because the Kli (vessel) discovered its oppositeness to the Creator, and feeling shame, it made the restriction on itself.
[251420]
From the Kabbalah Lesson in Russian 6/23/19

Related Material:
Heaven And Hell – Here And Now
The Fire Of Hell
How Do You Imagine Hell?

Perception of reality is impossible to explain in words; you either see reality or you do not. If I take off my glasses, I will not see anything in front of me. I will know that there are people there and I will hear their voices, but I will not see them. In order to see reality through the Creator’s eyes, we need such glasses in which we could see the soul that exists in everyone and in all of us together so that it would be as one whole. This is how it works because perception of reality, as the sum of individuals, a sum of units, requires a different, integral approach.

We want to depict the Kabbalistic groups around the world as one group, and we want to care for all equally, rising above our personal concern for our ten, our country, and our language to the common soul of all humanity, the entire Babylon. This is all in order to correct our perception and see reality through the Creator’s eyes, in an integral and collective form.

Therefore, we should now try to think about the common soul, at least about all our groups in the world, in order to step over all differences between us. Everyone will thus correct their shattering and our perception of reality will become more integral.

How can we do this? It can be done only by working on our feelings with the help of the mind, understanding how important it is to connect the parts of the shattered soul. We must do everything in our power, and we will then arrive at the prayer that will save us. The problem is that it takes a lot of effort to reach such a prayer, when I understand that I cannot realize what I desire, but I want it very much and I know whom to ask and that He can help me.

We correct nothing by ourselves and make no connection to each other. Yet, if despite the rejection, we nevertheless make efforts, then we turn to the Creator who completes the work for us. This is how we should prepare for the congress in Bulgaria: do everything possible and then part of the convention will become a prayer.

This is no longer a relationship in the ten, the understandable human connection that is in my field of vision and sensation, but rather something intangible and unclear: with whom and how do I connect? I do not have the forms within me through which I connect with other groups into one Kli; therefore, all that is left for me is to pray, to ask.
From the 1st part of the Daily Kabbalah Lesson 9/16/19, Baal HaSulam, “600,000 Souls”

Related Material:
Birth Of One Single Group
Everyone Is Equal In The Group
Humanity Is One Group

We need to obtain a special desire to receive, the kind that doesn’t disappear as soon as it is filled. We can only truly enjoy from mutual love, from the desire to fulfill others. We can learn how to rise above the desire to receive and attain a desire to love others through connecting workshops in a course in integral education. This course touches on the most important emotional questions for a person. Who am I? What am I? What do I live for? People learn how to be open and overcome the feelings of coolness and rejection that arise when we approach one another. We succeed when we have the right attitude toward others thereby creating a common emotion called the center of the group, which becomes a source of happiness, warmth, freedom, and fulfillment for all.
[147041]
From KabTV’s “New Life 246 – An Integral Education Course, Part 2,” 10/29/13

Writings of Baal HaSulam, “Preface to the Wisdom of Kabbalah,” Item 65