“Millennials: Redefining The Rules Of The Economy” (Medium)

Medium published my new article “Millennials: Redefining the Rules of the Economy” 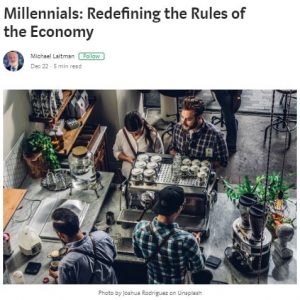 As a new year approaches, an atmosphere of increased consumerism envelops societies across the globe. However, there is a generational stratum that is spoiling the commercial hoopla: the millennials.

Getting a new car, a new house and a new partner are common New Year’s resolutions. None of these goals, however, impress the millennial generation born between 1981 and 1996. They have been the subject of intensive scrutiny by economists and analysts in efforts to interpret their financial priorities and mindset.

Why is this so important to economists? It is because millennials, estimated at around 80 million people in the US alone, are projected to surpass baby boomers as America’s largest generation. The millennials were expected to consume more and contribute more to the economy than the baby boomers, but it’s not happening and analysts want to know why. Are the non-capitalistic choices of this group to blame for destroying the economy? Or are their modest spending patterns the product of a merciless economy inflicted on Americans for years under the control of the elites?

A new study by the Federal Reserve Board revealed that in comparison to previous generations, at the same age, millennials have lower income and less wealth than their predecessors. Being born and raised in an era when capitalism was out of control, in which the strong preyed upon the weak, they found themselves hopelessly in debt from financing their university education, making it practically impossible to afford independent living even at a minimum level, let alone buying a new house. However, experts and leaders point blaming fingers at them for their limited spending and its “negative effects” on the economy.

Millennials were expected to consume and participate in the labor market at least as much as their parents, if not more. They were supposed to believe in the American dream, just like their parents. But they have lost hope and trust in the current economic system, while experiencing the highest levels of anxiety and depression on record.

However, instead of addressing the root of the problem, the economic establishment and the media (which is at the service of the elites) are disgruntled that they cannot extort the children, the millennials, the way they managed to extort their parents.

Tomorrow, the world will continue to try and follow the same outdated financial patterns. The elites will continue to maintain the traditional economy that encourages consumption and concentrates capital under the control of a handful of tycoons. Feeling deprived and frustrated, more and more people will demand social justice. They are likely to replace leaders, call for the limitation of salaries of elected officials, demand the lowering of VAT (value-added tax) on basic goods, and a freeze in tax increases for the lower and middle classes.

The future is not far off when the world will look quite different: an industrial-technological revolution will make giant steps toward mass automation, throwing much of the workforce out of the labor market and locking the gates behind them. When there is no work, there are no salaries, and when there are no salaries there’s no money to spend, and when there is no money to spend, non-essential products aren’t purchased, and since a major amount of what we presently consume are non-essential products, then the domino effect continues as the businesses tied to these products also fall.

Under circumstances like these, what will the unemployed masses do? Will this scenario open a valve of frustration and rage into the streets? Are the recent violent riots in France just a small taste of what’s in store? While this may not happen tomorrow, what will day after tomorrow bring?

It is both possible and necessary to prepare ourselves now for the coming future. Accordingly, we must plan to prevent undesirable future chaos by ensuring that every citizen receives a basic income sufficient to live in dignity. However, alongside fulfilling physical needs, we must also calm the spirit and fulfill the soul. In the face of these huge systematic changes in society, a newly-tailored educational system is crucial to help disoriented citizens reorganize their values and priorities. The goal of such education is to guide people to positive and balanced relationships through a clear understanding of the global integral system in which we live.

The expectation that money can provide a sense of security will disappear as the crisis worsens. Therefore, we must educate ourselves in how to build a society that provides a person with the kind of security found in a loving family. Instead of nurturing predatory competition that puts us in a constant race of survival, we will develop humane competition that drives us all to contribute as much as we can to social cohesion. Instead of engaging in jobs that exact a heavy psychological price to the benefit of corporation owners, we will turn to creative and social occupations that serve the majority in a new whole new concept of work.

Instead of judging people by how much they earn, we will measure each other according to our contributions to society. Instead of working around the clock and barely spending time with our children, our time will be spent building tight family units. Instead of an advertising industry that drives us to compulsive consumption of pointless products, we will learn to live happily and sustainably. Instead of marketing propaganda that sells well-packaged material illusions, the media will help us see that happiness lies in positive social relations.

Of course, none of this will happen tomorrow morning, but today we can begin this gradual and ongoing educational process. Unlike anything we have known before, such a transformation of society cannot come through coercion and oppression. Instead, it is a process of building new values in society and upgrading public awareness so that we start balancing ourselves with the constantly fluctuating, globally interdependent conditions. As a result of this upgrade in collective consciousness, institutional changes in the concept of labor and in the economic system can develop organically and peacefully.

Moreover, when we begin to focus on building qualitative, meaningful relationships, we will discover a newfound source of satisfaction. As the emphasis shifts to how we can positively connect above all differences in society, we will become less immersed in material matters, and more involved in a fulfillment that is a lot more natural and common to all people. We will then feel a new kind of happiness, confidence and satisfaction as we, through our efforts to positively connect, begin to tap into an energy source dwelling in nature that will nourish and advance us to a higher level of consciousness.
[238878]

New Life #119 – Business And The Benefits Of Connection
Podcast Powered by podPress (v8.8)