“Hebrew Language Day: An Opportunity To Learn About The Code Of Love“ (Breaking Israel News)

The largest portal Breaking Israel News published my new article “Hebrew Language Day: An Opportunity To Learn About The Code of Love“: 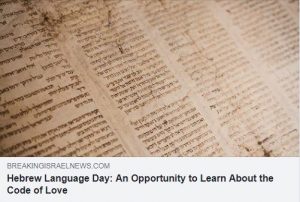 We are fortunate to be living in a time when we can speak Hebrew freely. I only began to learn Hebrew when I moved to Lithuania in the early 1970s, while in transit on the way to Israel. Until then I only got to know the Hebrew language slightly, through my grandfather who read the Gemara and prayed from a siddur (Jewish prayer book). If you had asked him about the meaning of the Hebrew words, he would have answered you in Yiddish, just like all the elderly people who lived in Vitebsk, my hometown. Our parents were forbidden to speak Hebrew altogether. They spoke mostly Russian, and occasionally Yiddish.

Celebrating the Birth of A Special Language

The Hebrew language is a unique phenomenon. It’s an expression of love-hate relationships.

After the destruction of the Second Temple, which was destroyed as a result of unfounded hatred, Hebrew almost completely disappeared as the Jews’ daily spoken language. From the second century CE until the beginning of the twentieth century, the vast majority of Jews spoke the local languages of the regions in which they lived. Yet, they learned to read and write basic Hebrew so that they could pray and read the holy books, just like my grandfather in Vitebsk.

Eliezer Ben-Yehuda, whose birthday falls on Hebrew Language Day, and in whose honor this day is celebrated – was the man who revived the Hebrew language. But when reviewing from a deeper and more comprehensive perspective, the reason we have resumed speaking the Hebrew language every day is that the people of Israel are gradually returning to their spiritual roots: to be one as one man with one heart, setting an example of unity for all peoples, and thus become a “Light unto the nations.”

The revival of the Hebrew language is the first expression of the glue that binds the people of Israel together. And even though we are not fulfilling our purpose yet, we are on our way towards it.

According to the wisdom of Kabbalah, Hebrew is not a language like all other languages. The twenty-two letters Hebrew letters are actually twenty-two code symbols. Kabbalists use these code symbols to describe the process of discovering the connection with the spiritual reality.

Kabbalists refer to spirituality itself as “an abstract light” that has no shape or form, and the first sensation that one feels when entering the spiritual reality is referred to as “a black dot in the white light.” That little point is the root of one’s soul.

Through love towards others, the little black dot receives additional desires and develops into a spiritual vessel we call “the soul.” As the soul grows and develops through love of others, it can then be filled with greater spiritual light.

Each letter in Hebrew has a unique shape, made up of horizontal lines and vertical lines. The horizontal lines express the intensity of love and giving of the soul. The vertical lines express the lights that fill the soul. Thus, the twenty-two shapes of the Hebrew letters express twenty-two ways in which the soul is filled with the light of love towards others. And when the letters join to create words and sentences, the Hebrew language emerges.

The Spiritual Mission of Hebrew Speakers

Today, connection with the spiritual reality through love of others has to happen by rising above the human ego that has inflated over millennia. Although Jews have gathered from the four corners of the world and have returned to speak Hebrew again, Kabbalah explains that the true revival of the Hebrew language is the revival of the soul.

The next stage for the Jewish people is not only to speak the Hebrew language, but to speak it from the soul. In other words, to develop the quality of giving and love again, to receive light in the soul, and thereby speak Hebrew from heart to heart.
[239271]

“Jewish Innovation: Discarding Our ‘Dirty Laundry’” (The Times Of Israel)