The time has come for a different kind of connection that is not based on egoism, which the current system is built on. 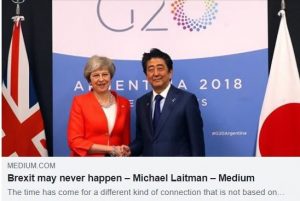 Thanks to the recent Brussels summit, there is now an agreement on the table for the withdrawal of the UK from the European Union, but I doubt that it will actually happen. It took 20 years to connect all these countries into a single entity, and I believe it will take at least another 20 to disassemble it.

Europe is beginning to disintegrate. The days are gone when Europe used to think about unification and was attracted to the idea of unification. All the EU countries wanted to be part of the new entity, and paid dearly for the loss of their independence.

Today, nationalistic trends are once again on the rise. For instance, the EU’s two main centers, Germany and France, are going through very difficult times and it’s only the beginning. They are afraid of losing their identity and stability. Compared to countries such as China, India, and Asia in general, they are no longer the center of the world. If until recently they were the cultural and educational centers of the world, they have recently filled themselves with migrants and are busy dealing with them, and they can no longer show the world that they are truly a cultural center.

It is a complicated situation. If we lose Europe’s culture and education, we then have no idea what direction the world will take. However, we still fail to fully grasp how the world loses its stability due to losing Europe as the foundation of Western culture and human education. It has developed over the last 2,000 years upon the backdrop of Rome, Greece, Judaism and Christianity. Essentially, we’re failing to take heed of the fact that humanity’s central elements are being replaced, and as a result, Western society and culture is on the decline.

Humanity has an inner, transcendental foundation. It is not so apparent, but this inner foundation is part of our DNA. Just as we inherit our parents’ genes, we inherited culture, education, science and access to the European way of life. America, South America, Asia, India, China and all colonialist development emerged from such an approach, and we fail to envision a world that loses the European element. It would be a completely different world to the one we now know, one that would be forever changed.

Europe’s influence on the world has always been extremely important. It went hand-in-hand with America’s economic power and influenced India and China. Now that these relations are fading, it is difficult to say what the future holds.

I cannot even find the words to convey how strongly I feel about this subject. Europe as the world’s cultural and educational infrastructure was in the making for 2,000 years. Even the structure of our governments come from the European approach. All these things are now losing their foundation.

Just as divorce is a difficult process, it will now be extremely difficult for England to extricate itself. The time has come for a different kind of connection that is not based on egoism, which the current system is built on. The end of the European Union actually marks the end of the world that has reigned for thousands of years, clearly demonstrating that we are not heading in a sustainable direction. The egoistic foundation does not let us connect in a positive way, and it is leading us from one disaster to the next.

Europe’s only hope at this point is to embark on a new path, by implementing a new form of education, one that emphasizes how to connect, collaborate and cooperate above the egoistic foundation. If we fail to connect above our egoistic divisions, then we will simply sit back and let the egoistic forces wipe out everything positive about Europe. There will then be no turning back to how things were.

The approaching economic crisis will accelerate this process and truly shake Europe. As soon as economic stability shatters, and people don’t have food to eat, then society’s flaws will become clearly visible. On one hand, we have an abundance of surplus merchandise and food, and on the other hand, no one wants to give anyone anything. What is the lesson to be learned from this unsuccessful union? It is that we are transitioning to a new world.

What was the European Union really based on? Why did all these countries decide to connect despite the wars and deep hatred? It is because they were afraid. France was afraid of Germany. Germany was afraid of all the others that were pressuring them. They wanted to unite for egoistic reasons and this is why it has failed so spectacularly. The Brexit affair might drag on and on, but one thing is for sure, Europe will never be the same again.

Where Can You Get The Strength To See The Friends Above Yourself?
Podcast Powered by podPress (v8.8)