My new article on Linkedin “New Antisemitism: Mutation of a Long-lived Hatred” 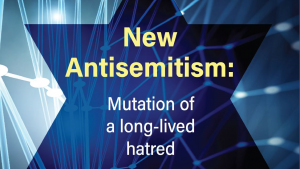 After publishing The Jewish Choice: Unity or Anti-Semitism, I felt that while the explanations in it covered the history of the Jewish people, the book did not address current expressions of the oldest hatred. In light of the exponential rise in antisemitism since the turn of the century, the need to publish such a composition became increasingly urgent. Now, thanks to the great efforts of Norma Livne, the editor in chief of my latest book, the picture is complete.

New Antisemitism: Mutation of a Long-Lived Hatred not only covers the myriad exhibitions of antisemitism around the world, it also details a unique solution that derives directly from the ancient wisdom of our sages.

Current solutions focus on curbing displays of Jew-hatred or fighting it on the legal arena and on social media platforms. However, the results speak for themselves: These methods do not work. At best, they are slowing down overt displays of antisemitism, but they are fighting a losing battle. Already, antisemitism, a taboo until only a few years ago, has become mainstream, a legitimate topic of discussion.

New Antisemitism suggests an additional approach, a more proactive one, to complement the arsenal of weapons against antisemitism. Relying on the legacy of our sages, the book celebrates the power Jewish inner solidarity as an antidote to Jew-hatred. It suggests a revolutionary idea: The world hates Jews only as much as Jews hate one another.

In a reality of escalating violence against Jews on one hand, and Jewish helplessness against it on the other hand, this idea provides a feasible and powerful solution, which requires nothing but resolve on the part of the Jews. For this reason, I believe that New Antisemitism: Mutation of a Long-Lived Hatred is a must-read for anyone who seeks to defeat the indefatigable nature of this social virus, and is willing to employ its long-overlooked, practically free solution that lives in the heart of every Jew, namely Jewish unity.

I wish to convey my deepest gratitude to all the editors, proofreaders, designers, researchers, and everyone who helped in publishing the book for their hard work, and for making it into a composition that can benefit all of humanity, and first and foremost, the Jewish people. They put their heart and soul into the work, and I believe that the world can be a better place thanks to their efforts.
[303433]