“Put Leaders In Our Shoes” (Linkedin)

My new article on Linkedin “Put Leaders in Our Shoes” 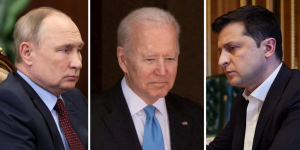 I recently posted my reply to an email I received about praying. I receive many emails, and these days, a lot of them concern the war in Ukraine. Another email I received about the war came from a man named Vladimir. I do not know his nationality, but his plight is universal. He wrote, “Dear Michael Laitman, I’d like to share with you that I tried to put myself in my friend’s shoes. His son is fighting in the war. After five minutes, I went into a state of shock. I kept the phone constantly in sight, and dreaded every time it rang or vibrated that it might be someone giving me the worst news. My hands felt as heavy as lead, and life became the pauses between phone rings. Tell me, what kind of world are we living in? Why are we given this today?”

My reply to Vladimir was simple: We are given this horrible situation so we will experience it and be able to decide how we want to live. It is we who have built our reality this way. Therefore, despite the pain, it is also our responsibility, as a collective, to make it better.

One thing that would work is if we placed the “managers” of our world in this situation. If they experienced the same fear for their family as we do, even if only for a week, their attitude would change. If they, too, dreaded the ringing of the phone the way we dread it, they would understand much better what war means for those who actually experience it.

People who feel this anxiety become more responsible. When your own children are at risk, it is a different story than when your children are safe and sound, away from the war, and you are sending other people’s children to the battlefield.

If that were the case, they would do everything within their power to avoid a war. Decision makers who have children on the front lines think differently from those who have no children out there; they are far more disposed to contemplate and act in service of the interest of the public rather than seek their own glory and prestige.

Therefore, if you asked me what I would advise, this would be my advice for a quick end to the war.

Two Forces Acting In The World

War Has No Future
Podcast Powered by podPress (v8.8)