“What Could Humans Learn From Fungi?” (Quora)

Michael Laitman, On Quora: “What could humans learn from fungi?“

Israeli researchers discovered how a fungal network manages the exchange of nutrients between trees. Fungi connected to tree roots communicate the transfer of minerals, nutrients, water and carbon, while the trees funnel their carbon to the fungi in return. The researchers also found that the fungal network serves to strengthen and recover trees that developed certain problems.

Therefore, one thing we can learn from fungi is that there are complex and smart connections in nature. Among us humans, we actually have much more complex and profound connections, but due to our egoistic nature, we have no idea how to approach them. Fungi and trees, however, use their connections to their mutual benefit because they contain no such ego.

However, nature made us human beings with the ability to connect two opposite qualities, the negative egoistic quality of humans and the positive altruistic quality of nature. It is so that we can correct our egoism into its opposite—altruism—and by doing so, reach nature’s higher degree. And for us, nature’s higher degree is one of love, bestowal and positive mutual connections among everyone.

On one hand, fungi have a certain awareness of something missing in the ecosystem, and pass on certain forces to complement it. Among us people, on the other hand, we can see opposite examples, such as people continually amassing more and more wealth to a point where they do not know what to do with all of their surplus, while others starve to death.

We would thus be wise to learn from fungi about the intricate connections in nature, and that we can positively realize our interconnections by prioritizing the benefit of others over self-interest. Our eyes see an egoistic reality, but behind the scenes, from the perspective of nature itself, is an altruistic reality, and if we filled our connections altruistically like nature, then we would experience harmonious, peaceful and whole lives.

We would then gain nature’s wisdom. We would understand how the intricate connections in our reality work, and how we could maximally benefit our lives by mutually complementing each other through positively realizing such connections. 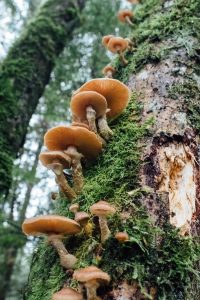 The Image Of An Ideal Judge
Podcast Powered by podPress (v8.8)