“The Scholar Who Knew The Greatness Of Baal HaSulam” (Linkedin) 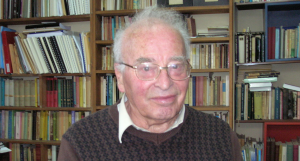 Of all the people who were not his disciples, and with very few other exceptions, no one has written with greater admiration and appreciation about the work of Baal HaSulam than Prof. Eliezer Schweid, who passed away last week. Rav Yehuda Ashlag became known as Baal HaSulam (author of the Sulam [ladder]) for his Sulam commentary on The Book of Zohar. Schweid, winner of the Israel Prize in Jewish Thought, recognized the greatness of spirit behind the unassuming, scrawny figure who devoted his entire life to trying to save the Jewish people and the world from the impending catastrophes that he predicted they would bring upon themselves through hatred and hubris.

“Rav Yehuda Ashlag, Baal HaSulam, was among the greatest Jewish thinkers of his time. Seeking the truth—for it is the truth—was his life’s mission, his goal, and the manner by which to fulfill his life’s goal. It seems as though for this reason, he was known only to few.

“It is not the difficulty to understand his words that had left him unknown. On the contrary, Baal HaSulam had a rare gift for deciphering secrets and elucidating deep matters. His words are crystal clear, to the point that any reader attains through them the truth he shows by perceiving how it pertains to his life’s experiences.

“As a thinker on a mission, Rav Ashlag strove to become known in order to bring salvation to the world, but he spoke alone, a Jewish man among his oppressed and persecuted people, suffering, tormenting with him and with him, awaiting salvation. He addressed his people directly, as individuals, wherever they were, beyond parties and without a mediation of a party, movement, or specific school. This is why no establishment or institute stood behind him. That was the price that Baal HaSulam paid for his integrity, openness, his freedom of thought, and his bold spirit.

“However, precisely because of all those merits, his words were not enslaved to the shortsightedness of passing ideologies and are as pertinent and convincing today as they were then, and perhaps even more so, since much of what he had predicted came true. His explanations are still valid as a tool to cope with the challenges of the future of humanity, of the Jewish people, and of the State of Israel.”

And may I add: May we merit realizing the teachings of Baal HaSulam.
[292870]

Care That All Will Be Happy

A World Filled With The Creator
Podcast Powered by podPress (v8.8)