My new article on Linkedin “Nowhere Left to Run” 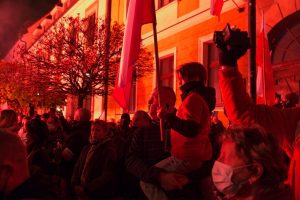 In 1938, after Polish citizens perpetrated pogroms against Jews in Poland, the influential Jewish poet and songwriter Mordechai Gebirtig wrote a song warning Polish Jews of the impending danger. “Fire, brothers, fire! Our city is all on fire!” he wrote. He testified that he cried like a baby when he wrote those words. Even though the song became popular and the refrain was, “And you are holding back and do not lend a hand,” it did not help.

Like him, kabbalist Yehuda Ashlag, author of the Sulam [Ladder] Commentary on The Book of Zohar, foresaw the calamity. Being a resident of Warsaw, he warned the Jews there and tried to arrange for hundreds of Jewish families to come to Israel (then Palestine) and save themselves. Regrettably for the Jews, the leaders of the Warsaw community talked them out of the plan promising that no harm would come to them.

Last week, on the eve of Polish Independence Day, hundreds of protesters gathered in the Polish town of Kalisz and vowed to chase the enemies of the homeland to Israel, referring to the 3,500 Jews living in Poland today. They burned books, shouted “Death to the Jews!” and no one stopped them.

This is happening not only in Poland. Every day we hear of another demonstration against Jews in some place in the world. Jews are spat on in New York, beaten up in Belgium, their stores are daubed with neo-Nazi graffiti in Germany, they are murdered in France, and synagogues and cemeteries are desecrated around the world.

Unlike the days of the Third Reich, today everyone sees what is happening. In some cases, the attacks are broadcast live on social media. The one thing that has not changed is our complacency, our blindness to the truth that we are in the midst of an antisemitic wave that is growing like a snowball and that no one can or wants to stop.

We must not succumb to such obtuseness. We must acknowledge the (very) inconvenient truth: If Jews before World War II had somewhere to run, at least to some degree, today there is nowhere left to run. There is no safe haven for Jews.

The only refuge we have left is the bond between us. We must forge a bond so tight that it forms a shield against those who want our harm. Now is the time to return to our core values: “Love your neighbor as yourself,” and “as one man with one heart.”

There is a spiritual power in the bond between us. It is the bond that bound us together in ancient times. It has always been our protection; when we nurtured it among us, it melted the hatred of the nations toward us.

We are not an isolated nation. Our ancestors came from all over the Fertile Crescent, and the people who lived there eventually spread throughout the world. The Jewish nation holds within it representatives from all those nations, and that tiny, indistinguishable link connects us to every nation on Earth. Therefore, when we make peace among ourselves, the nations of the world respect us and make peace among themselves. On the other hand, when we are disunited, humanity spurns us and blames us for the fights that break out among them.

To help ourselves and help the world, we must stop running away and look at one another, the brothers we hate. We must rise above the animosity we feel for each other not because we want to, but because it is what the world needs, and the only thing that will make it stop persecuting the Jews.
[290023]

“How Do We Fix Evil Or Things Going Wrong?” (Quora)