My new article on Linkedin “Social Frustration in Israel” 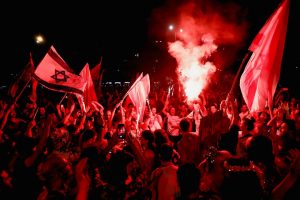 Over the past several years, we have been exposed to an accelerating avalanche of corruption that is baffling and disturbing. This is especially true now, that corruption is exposed in institutions tasked with preventing the very crime they are committing: criminal corruption. High-ranking police officers, judges, members of the Knesset (Israeli parliament), ministers, prime ministers, and even the president, all have been convicted in serious offenses, from fraud and embezzlement to rape.

If there is any good about this awful list, it is the exposure of the truth. Now we know that we cannot trust anyone since human nature is inherently corrupt. The only way to prevent corruption is to change the crooked human nature for the better. The other option is anarchy.

But corruption isn’t the only cause for social frustration in Israel. If, previously, we hoped that time would heal the many social ruptures in Israeli society, we now know it will not happen. Secular vs. orthodox, Jews vs. Muslims, Ashkenazi vs. Sephardi, Tel-Aviv vs. the rest of the country, and the list goes on and on. It feels like the country is disintegrating from within.

The problem is not that we have veered off from the right track; it is that we were never on it. From the very beginning, we did not aim to realize the purpose of establishing a Jewish state. We treated the motto “Love your neighbor as yourself” as a naive principle that no one can, or is even expected to live out. We forgot that we were exiled from here precisely because we shunned this principle, and that our sages have been telling us for centuries that we will not succeed here, or anywhere, unless we reestablish care and mutual responsibility among us.

Now, as people are becoming increasingly and irrevocably connected, without concern for others, everything collapses. We, the people of Israel, who were entrusted with modelling the implementation of the principle of love of others and mutual responsibility, had to strive to realize this motto in our sovereign country from day one. Since we did not have this principle in mind, we have been in social relapse from the very beginning.

Now our corruption is manifest, but at least we know who we are and can decide to change it. And with the world realizing that we have failed it, it is beginning to pressure us in order to either change us, or get rid of the country and the nation that failed it.

In the meantime, the social frustration in Israel has amassed to levels that can erupt in destructive violence. To avoid disaster and prevent the looming social collapse, we must start working on our very nature.

It is not a political issue and goes deeper than any social dogma. It concerns changing the motivation for our actions from purely self-serving to a balanced approach that also sees the needs of the collective.

It is not a question of kindness; it is a question of survival. We simply cannot afford to be so selfish anymore. Unless we take other people into account, unless we learn to care about what they need and want, and strive to sympathize with them despite our inherent alienation, we have no future here in Israel, and perhaps no future anywhere.
[288612]

“What’s Your Secret To A Happy Life?” (Quora)