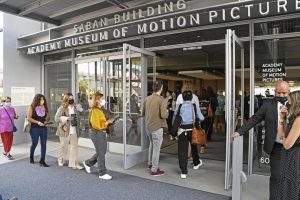 After a decade of delays and a cost of nearly $500 million, the Academy Museum of Motion Pictures in Los Angeles has finally opened to the general public; here classic films will be screened and screenplays and pictures from the dawn of cinema will be shown.

But the surprise that many have today is that there is no mention in the museum of the pioneers who built the Hollywood industry: the Jews. An article titled “Jews built Hollywood. So why is their history erased from the Academy’s new museum?”, published in The Forward, brought this subject to people’s attention. The author quotes Doris Berger, the museum’s senior curator, explaining the reason to omit the bold Jewish contribution to Hollywood, “We want to attract many different audiences. We want people to see themselves in our programs and exhibitions featuring highly known objects and films as well as lesser-known filmmakers. We aim to create dialogue.”

Jews of Eastern Europe who immigrated to America were the first to build Hollywood. Until the end of the 19th century, even the beginning of the 20th century, Jews were excluded from various professions, educational institutions and social circles. As those who had nothing on the one hand had an opportunity opened up for them on the other, the Jews took with both hands and gratitude the uncultivated ground of cinema.

The place was vacant, it was very easy to enter, work and succeed, and they were drawn there as to any place without disturbances and restrictions. Thus, with the help of the developed business sense, the Jews made the film industry a comfortable cushion of prosperity.

It is likely that behind the modern pluralistic philosophy of the museum’s Jewish curator lies a simple need to obscure these facts, to lower Jews’ prominence and remain under the radar. The truth is that this is not a great loss because the people of Israel, blessed with their skills, are not meant to entertain the world and provide it with an hour and a half of escape from reality.

The role of the Jewish people is to harness a sharp thought and wise heart to spread a fulfilling explanation of the nature of the world to human society providing the tools and knowledge to connect to each other in this difficult life. This is the doctrine of the nation, these are the aspects rooted in our people that we are commanded to realize and instill in everyone. In other words, until we, the people of Israel, present the method of fixing the world, it is worthwhile for us not to be vociferous.

Even so, Jews in the United States cannot afford to show the current state of affairs and brag about their contribution. Jew-hatred is on the rise in America and there is no need to add trivial prominence. We need to be pioneers in presenting the story of humanity: where we are today and where we can head to if we work for change.

Drama and comedy, laughter and crying, are tools that touch the heart directly, so through them one can describe with sensitivity and wisdom the immense difficulty we are in today. With their help it is possible to illustrate on the one hand all the natural disasters that afflict us, all the cruel battles and struggles that erupt between us and on the other hand to draw in clear lines our abilities to overcome forces and create a better world.

The Jewish people are able to be pioneers in creating a new script, a new plot to reverse the current negative society’s trend by redirecting the ties between us, from receiving to giving, from hatred to love.
[289138]

“What If We Could Be Young Again?” (Linkedin)