“Toward The Abolition Of The Nation-State” (Linkedin) 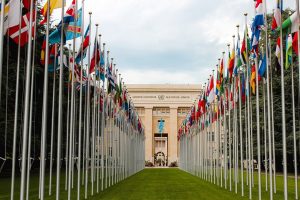 A comment on one of my recent posts about the state of the world stated, “There have always been cataclysm [sic] all over the world,” basically stating that it’s not the end of the world as we know it. Factually, that comment is evidently correct. Why then is there a point in focusing on what is going on today? There is a fundamental difference between what is happening these days and what had happened until today, even when the cataclysms are not as bad as past ones, at least not yet: Now they are happening everywhere, concurrently, and with growing ferocity and frequency. Another, very important, point: People are far more fragile and therefore far more affected by cataclysms than our ancestors.

The more these fires, storms, earthquakes, and pandemics plague the world, the more we will feel helpless. The gap between the life we believe we deserve and the life we actually have will become a chasm that will impel us to realize that we cannot cope alone. We will realize that only unity can save us, but our egos will drive us further and further apart. Finally, we will realize that until we deal with our egos, we will not be able to deal with our problems. At that point, we will realize that we have to overcome our separation, and that the most divisive element in our world is nationality. That will be the day when we decide to bid farewell to the notion of the nation-state.

There will still be elements that create diversity, such as culture or ethnicity. But diversity is not negative, but positive, increasing a nation’s strength and resilience. When people rise above their differences, they form stronger bonds than they had had before they fortified their cohesion. But when they are separated by countries, their intention is to stay apart and outperform other countries, and dominate them. This works contrary to the trajectory of reality toward unity. In fact, today, governments have become detrimental not only to other nations, but even to their own nations; there is nothing more egoistic than the government in each and every country.

The world will not be left ungoverned, but the government will consist of people who have been taught how to rise above local and personal interests, who feel and consider the world in its entirety, rather than a small section of it.

This may sound farfetched today, but it will not be long before we all realize that unity is a matter of life and death, that either we all adopt a reciprocal mode of thinking, or we will all perish. When that thinking becomes dominant, people will develop a more inclusive perception, including governors. Then, it won’t be inconceivable for a leader to actually have the benefit of the people in mind, rather than one’s own benefit or that of one’s cronies.

Also, there will not be a single, autocratic leader, but a council of individuals who are all committed to the well-being of the people. They will consult and jointly decide on the required policy in every matter. It will be a bit like the Sanhedrin that the people of Israel had had in ancient times, when people of high moral degree, whose minds and hearts were focused only on the benefit of the people, governed the nation and decided what was right and what was wrong. As I said, we are not there yet, but this is where humanity is going.
[285713]

“How Can We Contribute To Create A Sustainable Community For The Sustenance Of Life On The Earth?” (Quora)