“There Is A Purpose To The Israeli Palestinian Conflict” (Linkedin) 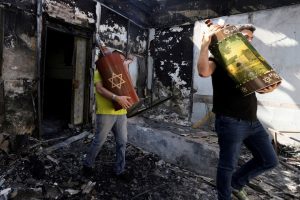 The conclusion of Operation Guardian of the Walls marked the end of yet another round in what seems to be a never ending conflict. After every round, we get some rest, but it is always shorter than we’d like, and the relentlessness of the enemy is tiring and wearing down our motivation. At the same time, we have nowhere to go, so we cannot afford to pack up and leave; it is a battle we cannot afford to lose.

While it seems like there is no end to the conflict, in fact, there can be an end to it, and it depends on us. First, we need to realize that neither military operations nor peace treaties will solve the problem. Dividing the land among Palestinians, Jews, Bedouins, and whoever else wants a piece of it will not solve anything and will not end the violence, since the conflict is not over territory, religion, or nationality.

It is an essential conflict whose purpose is to bring all of humanity to recognize the purpose of creation, the purpose of our own existence, and the purpose of the existence of nations, countries, religions, cultures, and races. This conflict is at the core of reality. This is why it seems inscrutable and insoluble.

When we solve the Palestinian Israeli conflict, we will balance the entire world, all of reality. Subconsciously, people feel it, which is why this conflict and this region are always at the center of attention. People rightly feel that their own well-being depends on what is happening in the Middle-East, and specifically between Israel and its neighbors. When we balance our relations here, it will resolve every other imbalance the world over.

The balance that we need to find will connect us to one another, and subsequently to the origin of creation. This origin, which we may call God, Allah, or any other name, has created all the contradictions in reality. However, it created them balanced and harmonious. Day and night, ebb and flow, winter and summer, male and female, attraction and rejection, birth and death, everything is balanced and the existence of one supports and is dependent upon the existence of the other.

We, humans, have disrupted this balance because we only focus on taking and receiving, and we strive to give nothing in return. This is why we exploit natural resources indiscriminately, even at the expense of the future of our children. This is also why we conquer, humiliate, and enslave other nations. In our effort to feel good about ourselves, we denigrate, patronize, and belittle others in order to make ourselves feel superior. Indeed, all our troubles come from the imbalance within us.

The Jews, whose nationhood was established uniquely through the oath to unite “as one man with one heart,” were the first to rise above the natural human predisposition for selfishness. This is why they were appointed to be the “light unto nations,” to set an example of unity and thereby show other nations how to unite above their inherent self-centeredness, balance themselves, and subsequently lead the world to balance.

Indeed, throughout history, when Jews united among themselves, the nations supported them. When they divided among them and became belligerent, the nations disparaged and reviled them. In the days of the First Temple, Nebuchadnezzar II conquered the land of Israel and destroyed the Temple only after Jews became spiteful toward each other and “stabbed each other with the daggers in their mouths” (Yoma 9b). Later, when they united while in exile, King Cyrus gave them back the land and helped them rebuild the Temple.

During the period of the Second Temple, when Jews were united, the nations would “go up to Jerusalem and see Israel … and say, ‘It is becoming to cling only to this nation’” (Sifrey Devarim, 354). When they divided and wanted to become like the Greeks, in whose kingdom they lived, they broke into war, the Seleucids conquered the land, and they freed it only after they united under the Hasmoneans.

But the Hasmoneans, too, did not maintain their unity as power struggles drove them apart, which brought upon us the Roman rule. The latter conquered the land and made Judah a Roman province. However, the Romans, too, would have been completely content to let us lead our lives according to our way, had it not been for the inner struggles among us and the corruption of our leaders that forced them to appoint their own procurators (governors). Finally, we broke into a full blown civil war and sought nothing but to exterminate one another. The end result of that war was the destruction of the Second Temple, and the exile of the remnants of the nation, and the slaying of the majority of their coreligionists.

Today’s Palestinians are doing what the nations have always done with regard to Israel: They are pressuring us to unite and become the example we must be—not for our sake, but for the sake of the world. This is why the world supports them. Since it is indeed our duty to unite and become the world’s example of unity, where all the opposites are balanced, the Palestinians are right to be angry with us. Nothing we will say or do for them will pacify them until we do what we must: unite among ourselves and thereby become a light unto nations.

Our choice is simple: Set an example of unity and win the world’s favor, or keep nurturing mutual hatred until the world expels us once again and executes us like the Nazis.

“Who Won The May 2021 Conflict Between Israel And Hamas, And Why?” (Quora)
Podcast Powered by podPress (v8.8)