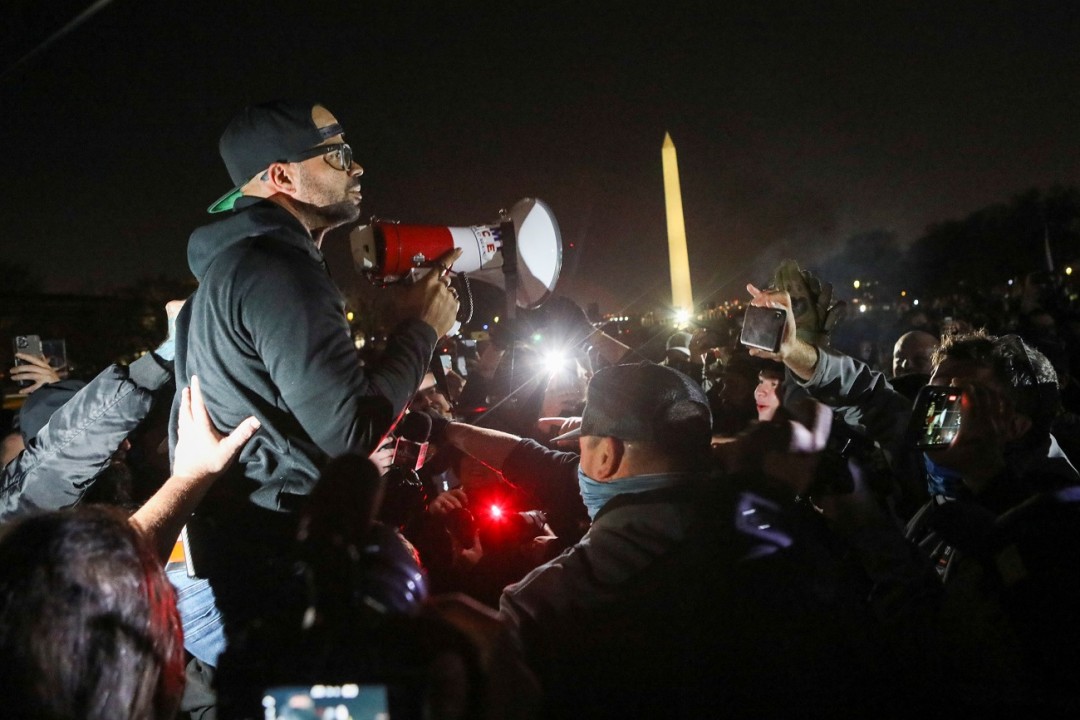 2020 began with a blow and is ending in turmoil. Covid-19 landed a painful whack on the face of civilization and stopped us in our tracks. Since it struck, we’ve been living in standby mode waiting for a vaccine to arrive. But however painful, the pandemic pales in comparison to the turmoil that the United States is going through after the presidential election, and which no vaccine can cure. It is said that when Wall Street coughs, the world’s stock markets catch a cold. We can only guess how the collapse of American democracy that we are witnessing today will impact the rest of the world, but whatever it is, it won’t be pleasant.

The good news is that the bleak future of America and the world is not written in stone. At least for now, we can determine it. But doing so will require commitment, determination, and most of all, acknowledging that we have reached the end of the rope and if we don’t do what it takes to save ourselves, we are doomed.

I am a kabbalist and a scientist. Before I started to learn Kabbalah, I was a scientist and did extensive research on how organisms maintain homeostasis (balance) in dynamic conditions. When I had come across my Kabbalah teacher, Baruch Ashlag—the firstborn son and successor of Yehuda Ashlag, author of a complete commentary on the The Book of Zohar—his approach appealed to me precisely because it was so scientific. Ashlag the son continued in the footsteps of his father, who, besides being the foremost kabbalist of the 20th century, was deeply interested in social sciences and humanities, and very prolific in his writings about it. His extensive knowledge of Kabbalah, which is the science of connecting people through social cohesion, helped him tremendously when he analyzed social systems and processes he lived through in the eventful mid-20th century.

In his latter years, after World War II, Ashlag occupied himself in two colossal projects, only one of which he managed to complete. Before his death, he published the complete commentary on The Book of Zohar which we now call the Sulam [Ladder] commentary. After this enormous achievement, Ashlag is now known as Baal HaSulam [author of The Ladder]. At the same time, he was working on what could have been an extensive explanation of the structure of society that Baal HaSulam thought humanity should build in order to establish a just, sustainable, and prosperous society. He left us with only drafts and notes, but there were so many of them that it is easy to see where he was going with his ideas.

What’s more, it is fascinating to see the clarity with which Baal HaSulam saw the future events that we are now experiencing first hand. He recognized that all people are inherently self-centered and will therefore exploit, bully, and subjugate others if only they knew they could get away with it. As early as the 1930s, he wrote the following in his essay “Peace in the World”: “In simple words, we will say that the nature of each and every person is to exploit the lives of all other people in the world for his own benefit, and all that he gives to another is only out of necessity. Even then, there is exploitation of others in it, but it is done cunningly, so his neighbor would not notice it and concede willingly. …This is an unbreakable law. The only difference is in people’s choices: One chooses to exploit people by obtaining lowly lusts, and one by obtaining governance, while the third by obtaining respect. Furthermore, if one could do it without much effort, he would agree to exploit the world with all three together—wealth, governance, and respect.” This is what we are seeing today: an absolute sense of entitlement and therefore unabashed and unbridled exploitation, or at least attempts at such exploitation. And as Baal HaSulam said, “It is done cunningly, so his neighbor would not notice it and concede willingly.” A few years after his warning, the Nazis came to power.

At around the same time, Baal HaSulam wrote elaborately on the faults of Russia’s communism, explaining that it wouldn’t last because the ideals of equality and contribution to society to the best of your ability, while receiving only what you need for your sustenance, was imposed on people who weren’t educated in this way, and would therefore fail. In fact, he was so confident about his observation that he wrote about Russia’s downfall in past tense even though he did it in the 1930s, when Russia’s communism was in its prime. In the essay “The Peace” (a different essay from “Peace in the World”), he wrote, “Indeed, history itself has troubled in our favor and has prepared for us an established fact, sufficient for a full appreciation and unequivocal conclusion: Everyone can see how a large society such as that of Russia, with hundreds of millions in population, more land than the whole of Europe, second to none in wealth and raw materials, and which has already agreed to lead communal life and practically abolished private property altogether, where each worries only about the well-being of society, has seemingly acquired the full measure of the virtue of bestowal upon others in its full meaning, as far as the human mind can grasp. And yet, go and see what has become of them: Instead of rising and exceeding the achievements of the capitalist countries, they have sunk ever lower. Now, they not only fail to benefit the lives of the workers a little more than in the capitalist countries, they cannot even secure their daily bread and clothes on their flesh.”

In the 1950s, when Baal HaSulam wrote his drafts and notes detailing his views about the sustainable and just society, he projected a dismal future for democracy, again because of lack of proper education. In these pieces, published in The Writings of Baal HaSulam, Baal HaSulam explains that he sees no future for democracy precisely because of the inherent evil in human nature, which has still not been corrected. In his words, “Since the dawn of time, it has never happened that the majority of the public governed a country. Either the autocrats did … or the oligarchy, or the deceitful democrats. But a majority of the simple folk ruled only in the days of Hitler, who, in addition, promoted wickedness toward other nations. He elevated [the value of] benefitting the public to the level of complete devotion since he understood the frame of mind of sadists, who, if given room to discharge their sadism, will pay for it with their lives.”

“Indeed,” continues Baal HaSulam, “it is the absolute truth that there cannot be a good and complete society unless its majority is good because the management reflects the quality of society… If the majority is bad, the management will necessarily be bad, as well, for the wicked will not place over them rulers of whom they do not approve. We need not deduce from the modern democracies,” he explains his lack of hope for them (back in the early 1950s), “as they use various tactics to deceive the constituency. When [the voters] grow wiser and understand their cunningness, the majority will certainly elect a management according to their spirit.” Therefore, Baal HaSulam explains that in order to deceive the public, the rulers of society place “dummies” that look good but are actually powerless, and their sole purpose is to enable the rulers to keep ruling undisturbed. In his words, “Their main tactic is that they first hail people with good reputation and promote them either as wise or as righteous, and then the masses believe and elect them. But a lie does not persist forever,” he concludes.

In the end, as Baal HaSulam says, a democracy that allows a self-centered majority to decide its leader will elect a self-centered leader, according to people’s inherent nature. This cannot hold for long. In the end, self-centeredness reaches such extreme levels that the whole system becomes corrupt and falls apart. At that point, democracy becomes yet another victim of evil human nature.

Until we change who we are, we will not change our leaders or regimes, and we will not be able to build a good society for all of us. We need to start acknowledging that not only is there room for all of us on this planet, but that we need all of us, all our views and our ideas, our fancies and dislikes, our colors and races and faiths and cultures. We need them because if they weren’t around, we, too, would be incomplete. Democrats would not be Democrats were it not for the existence of Republicans, and likewise Republicans. Can you think of manhood without comparing it to womanhood, or the other way around? Without each other, we wouldn’t be anything definable at all, just pieces of flesh wandering aimlessly until their time is due.

Today, more than ever, we need all of humanity to acknowledge this, and soon, so we will understand the harm we’re causing to ourselves through our cancel-culture and abhorrence for each other. As I wrote in the beginning of this longer-than-expected piece, we can still determine our future. When violence breaks out, I’m not sure it’ll still be possible. Therefore, we must hurry, convince ourselves and share with others the notions of our interdependence, of the vulnerability of democracy, and of the only remedy that can save our society and our future: education for connection.
[275421]

Hanukkah Is A Way Out Of Darkness
Podcast Powered by podPress (v8.8)