That Is How We Were Created

Rabash, Article 10, “What Is the Degree One Should Achieve in Order Not to Have to Reincarnate?” (1984): The thing is that we have to know that all of the souls extend from the soul of Adam HaRishon, for after he sinned in the sin of the Tree of Knowledge, his soul divided into 600,000 souls. This means that the one light that Adam HaRishon had, which the Holy Zohar called Zihara Ila’a [upper brightness], which he had in the Garden of Eden at once, spreads into numerous pieces.

There is a state called “one general soul” or Adam. This is a desire to receive, to enjoy, to fill one’s self, to be filled with Light.

In such a state this creature feels itself in the most minimal way because it has been filled quite a bit, like a baby who has been fed, had his diaper changed, lies in his mother’s arms, can smell her, and needs nothing else, he feels good.

The Creator does not wish to leave us in this state. He wants us to attain His state, which is the most mature state, and so He shattered this desire into 600,000 parts (souls), which are divided into an infinite number of sparks of the soul. 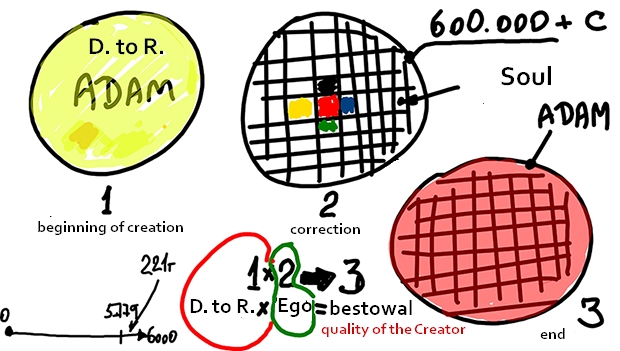 Each part differs from the others by its egoistic desire, which does not allow him to perceive the desires of others. There is a huge antagonism between them.

There is a particle of the general soul in each of us. Therefore, we don’t understand each other and cannot connect between us in any way. We can only feel that we depend on each other and that this dependence forces us to put up with each other. As long as I receive a filling in an egoistic manner, some benefit from others, I tolerate them next to me. If there is nothing I can gain from others, then I actually suffer from their presence and try to break away from them. That is how we were created.
[238904]
From KabTV’s “Fundamentals of Kabbalah” 9/16/18