“What Are Some Of The Most Mind-Blowing Facts About Israel?” (Quora)

Michael Laitman, On Quora: “What are some of the most mind-blowing facts about Israel?“

2. The people of Israel first received their name as a group of people who gathered around Abraham around 3,800 years ago. Abraham taught them the method of how to love one another above the fierce social division running rampant in ancient Babylon, and by using the method of attaining the ability to love, they acquired the name “Israel” (“Yashar Kel” or “straight to the force of love, bestowal and connection,” which is synonymous to God).

3. The people of Israel had no biological connection to each other. They were originally a gathering of people from around ancient Babylon who felt that society was becoming increasingly divided. They wanted to understand why people were suffering so much, what is the meaning of life, and how people could unite above the social conflicts. After applying Abraham’s method, they received the name “the people of Israel.” 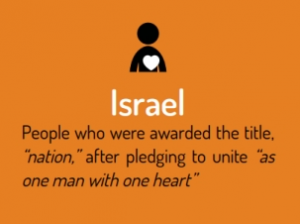 4. During the periods of the First and Second Temples, the people of Israel rose, fell, and then rose again in the attainment of love and unity above division. They prospered most when they experienced this spiritual form of unity. However, since the ruin of the Second Temple, they lost their attainment of the love and unity that glued them together above their divisiveness, and entered a period of exile and dispersion.

5. While in exile, the people of Israel have experienced many different forms of anti-Semitism. They have been blamed for murdering Jesus Christ, killing children and drinking their blood in the Middle Ages, causing the Black Death pandemic of the 14th century, killing Tsar Alexander II that ignited the pogroms of the Russian Empire against them, acting as internal traitors that led to Germany’s First World War defeat, and have been considered as money-and-power hungry conspirators who aim to rule the world.

6. As a Jewish state, despite the many contributions Israel brings to the world, including the Microsoft Windows operating system, the Pentium microprocessor, voice mail, biological pacemakers, cancer treatments using DNA nana-computation, stem-cell technology to regenerate heart tissue, pill-sized cameras for examining the small intestine, the first computerized diagnostic instrument for breast cancer detection, a heart pump synchronization device, as well as treatments for Multiple Sclerosis and Parkinson’s Disease, aircraft security systems, and ecologically, it was the only country in the world at the turn of the century that had more trees than in the previous century…

Israel is treated as the world’s Jew.

In a modern context of globalized anti-Semitism and anti-Zionism, Israel finds itself in a losing battle for a positive identity against multiple efforts aimed at its delegitimization and isolation: the application of international pressure in order to restrict its range of diplomatic and military response in the short term, and ultimately, to cripple it by delegitimizing its right to exist in the long term, stunting its ability to conduct diplomatic negotiations and act militarily.

The next three facts, however, are even more mindblowing…

8. Since the people of Israel’s disunity and division are felt as a cause for myriad problems in the world, they also hold a method to attain unity. If they implement the method of connection, like how they once did in the days of ancient Babylon, where Abraham guided them to unite above division, then anti-Semitism will not only become eliminated—it would invert to a positive form of support and encouragement for a people who spread a positive sensation of love and unity throughout the world.

9. The people of Israel’s role in the world is thus to unite (“love your neighbor as yourself”) above division (“love will cover all transgressions”) in order to spread love and unity to the world (to be “a light unto the nations”).

Nature Is Beginning To Teach Us

“How Changes In The Workplace Will Change Our Relations” (Medium)
Podcast Powered by podPress (v8.8)