“Would A Liberal, Progressive Iran Be Better For Israel?” (Newsmax)

My article in Newsmax: “Would a Liberal, Progressive Iran Be Better for Israel?” 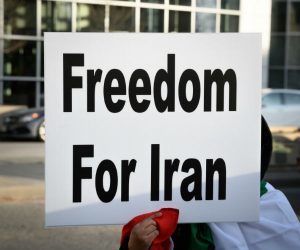 Could a more liberal and progressive Iranian rule or neutralized Iranian threat bring peace to Israel in the Mideast?

A popular leaked video shows an anti-regime demonstration where a group of protesting students in Iran carefully avoided stepping on United States and Israeli flags on the ground as they walked by, suggesting their different views to their rulers.

Besides this video, the world has trouble peeking into the populist revolt brewing in the heart of the Islamic Republic, because the Iranian regime blocks access to various networks, and churns out deceptive media.

However, the Iranian economy in crisis, rising unemployment, declining morale, and rebellion of the younger generation, become increasingly apparent. Iran’s youth flood the streets in protest over their economic situation and the rule of Ayatollah Khamenei.

The Untapped Potential of Iran’s Youth

30 years ago, I was in contact with a number of Iranians.

I was impressed by their intelligence, sensitivity, wide-ranging education, and their attraction to enlightenment, culture, science, literature, music — everything marking progress and development.

When Ali Hosseini Khamenei assumed the position of Grand Ayatollah, he took for granted that the younger generation would submit to the same draconian rule that has been dished out since 1979, especially since such rule is the only kind that they would be raised with.

However, such rule fails to take into account the global nature of our world with its ease of access to information, and the extent of the younger generation’s awareness of its restrictive conditions compared to the rest of the world.

Young Iranians, who feel that they host immense unrealized potential, have become envious and inspired by Westerners, wanting similar kinds of opportunities.

Not markedly religious and certainly not extremists, they realize that they could find success in any field given the chance.

Therefore, they harbor a lot of pent-up energy with which to come out and demand change.

They disagree with the billions of dollars being spent on weaponry while seeing no hatred or enemy threat from the West, questioning why they should suffer because of the ruling faction’s unrealistic aspiration to control half of the world, which falls short year after year. As they see an increasing number of civilians being killed, as well as tightening sanctions on the country, they see a bleak future.

Where Is Israel in This Picture?

If the protesters were granted their wish, a more liberal and progressive Iran, would the Iranian threats on Israel also become old news?

No. There would still be no meaningful change in the Mideast.

According to the wisdom of “Kabbalah,” reality consists of multiple layers. At the deepest layer we are all inextricably linked together, in our every thought and desire. Furthermore, the people of Israel, as written in “The Zohar,” have a non-negotiable role to play in this network.

The balance of forces in the world rests upon the people of Israel, on whether or not we perform our role: uniting with each other in order to pass the unifying tendency onto the rest of the world. Our unification has the power to open the door to a harmonious reality in the Middle East and the world. In other words, as is written about our role, we must become “a light unto the nations,” and until we do, we will find no peace.

When we unite above the naturally-surfacing divisive tendencies, we draw a positive force dwelling in nature, called “light” in the language of Kabbalah. A peaceful, safe, calm, happy and loving global atmosphere needs such light, a radiating positive energy fueling a willful joint effort to unite above division. Without it, no regime change will help.

When divided, we provoke a negative force. It severs our positive ties and makes us agree to divisive ideas and opinions. The more we continue letting our divisive drives surface, the stronger the hatred grows against us, haunting us with portrayals like the Iranian nuclear threat.

In the meantime, the Iranian threat, together with other anti-Semitic and anti-Israeli expressions running rampant in today’s world, are necessary to ensure that we do not become complacent and indifferent, and instead actively seek a solution to the growing discomfort. In other words, the intensifying negativity toward us from the world forces us to face questions about our identity, responsibility, and what we need to change.

Jewish unity is the answer.

There is untapped potential in our unity that would bring about nothing less than a perfect life for everybody — the Iranians and ourselves included. I thus hope that we start waking up to the call for our unity sooner rather than later, and by so doing, spare ourselves and the world much suffering.
[259256]

The Jewish Choice: Unity Or Anti-Semitism—What We Should Learn From History
Podcast Powered by podPress (v8.8)