In addition to the illness, death and fear that the coronavirus has effectuated, the global economy has suffered a major $160 billion blow. In China, Apple, McDonald’s, Starbucks and dozens of other chains have closed their stores. Entire cities have been shut down and most of the “Made in China” industry has been frozen.

Humanity has yet to digest the magnitude of disruption that China, the country with the world’s largest population, can inflict. China has become a cold mega-factory operating to serve its own money and power interests on the backs of an impoverished sweated labor workforce. It has developed into a powerful and assertive country with its tentacles spread throughout the world.

The vast amount of harm that the coronavirus has triggered makes a clear point: Nature disagrees with such a quickly expansive self-benefit-focused approach. The integral and altruistic quality of nature requires each of its parts to complement one another, thereby harmonizing themselves with the whole. For this reason, it is imperative that we stop for a moment and critique the situation that the crisis in China presents, since humanity is not above nature’s laws.

History is replete with examples of the rise and fall of powerful empires that sought to aggrandize themselves at the expense of others: Ancient Egypt; the Babylonian, Roman, and Mongolian Empires; colonial Britain and France; the Nazi regime; the Soviet Union, and the list goes on. The reason behind every collapse is that, ultimately, nature forbids overblown egoism to trample the world unabated, with one country or empire having pirate access to much of the world’s resources.

More blows such as the coronavirus can be expected if China continues to fiercely expand its power around the world at the expense of other countries and populations. These crises could take many grave forms—lethal diseases, financial ruin, wars and more. The press of human development has brought us to an era characterized by inescapable global interdependence. There are no more empty spaces and we have nowhere to hide. The crises will only intensify.

The magnifying glass is now over China to undergo this attitude shift: to become positively connected with, and concerned about, humanity’s growth and success. We are all in the same boat. Therefore, if someone adds too much weight on their side, we will all topple over. China’s current egoistic expansion is doing just that. It is a recipe for disaster. China thus needs to shift its robust influence in the direction of benefiting the whole world instead of benefiting only itself.

Therefore, I hope that China and the world will rush to treat the underlying disease of the egoistic nature residing within us and not settle for merely calming the coronavirus crisis. When we learn to think globally instead of nationally, the world finally will experience peace, stability and harmony.

(Image of Wuhan doctor Li Wenliang who died of Coronavirus) 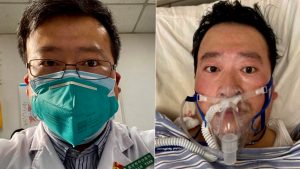