“How Workplace Stress Among Doctors Leads To Suicide” (KabNet)

KabNet published my new article: “How Workplace Stress among Doctors Leads to Suicide” 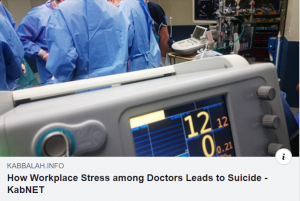 As distressing a problem as suicide is in and of itself, suicide among doctors is particularly troubling. Hundreds of doctors take their lives each year at a rate of over double that of the general population.

Why do so many doctors, a profession that is widely respected and well paid, end up committing suicide?

Doctors, and more specifically physicians, often find themselves under excruciating pressure, strict time constraints, and faced with cases beyond their ability to handle. Although trained to act with a sharp intellect and friendly warmth, some simply cannot bear the burden and face deep depression and stress.

They take on the patients’ problems, and by doing so, the doctors themselves become patients. Their dedication prevents them from abandoning their work, but the mental and emotional weight they bear stifles them. Some of them thus end up reaching such despair where they see no other option but to resign from life.

“Only positive connection among the body of human society has the power to cure our life’s systems, from the human body to the most distant reaches of society.”

Recently, in January 2019, an intern at the Soroka Medical Center in Beersheba, Israel put an end to his life, becoming the fourth suicide by an Israeli doctor since 2018. The other three were senior doctors. The overworked and highly stressful atmosphere of dealing with crowded emergency rooms, caring for patients that can be from difficult populations, as well as the demanding work of conducting surgeries, training interns, the need to work long hours, and also working in congested departments surrounded by infectious diseases during their long work hours, all takes its toll.

The medical profession has a responsibility on its shoulders beyond its ability to carry. From one year to the next, medical professionals try to serve every ill person needing help, to act as angels from heaven, but it surfaces that they too are mortal flesh and blood.

In Israel, the health care system is suffering, despite having no lack of funding. Patients often wait in long queues for someone to deliver them from pain. Doctors, nurses and hospital staff all work busily and devotedly day and night in order to ensure health for everyone. Yet, the diseases become more aggressive, patient needs more exhausting, and the medicines less effective. Ultimately, doctors find themselves entangled and struggling within the overwhelming complexity of it all.

Perhaps such a desperate situation will force us to recognize the single ultimate disease that has one ultimate cure.

When positive connection is missing between the “organs” of human society, when we fail to think and act considerately toward one another, our “social body” falls ill and dies, and with it, our physical bodies also. Only positive connection among the body of human society has the power to cure our life’s systems, from the human body to the most distant reaches of society.

Kabbalist Yehuda Ashlag, renowned for being the greatest Kabbalist of the 20th Century, wrote the following about this phenomenon:

“Observing life, we see that the process of a nation is just as the process of an individual. The functioning of each person within the nation is like the functioning of the organs in a single body. There must be complete harmony among the organs of each person—the eyes see and the brain is assisted by them to think and to consult, and then the hands work or fight, and the legs walk. Thus, each stands on its guard and awaits its role. Similarly, the organs that comprise the body of the nation—counselors, employers, workers, deliverers, etc.—should function in complete harmony among them. This is necessary for the nation’s normal life and for a secured existence.

“As the natural death of the individual results from disharmony among one’s organs, the nation’s natural decline results from some obstruction that occurred among its organs, as our sages testified (Tosfot, Baba Metzia, Chapter Two), ‘Jerusalem was ruined only because of unfounded hatred that existed in that generation.’ At that time, the nation was plagued and died, and its organs were scattered to every direction.” (Yehuda Ashlag, “The Nation”)

Separation causes both the death of the human body and the body of society. All the parts that make up any delicate system must be in a perfect symbiotic relationship. A spirit of mutual consideration and responsibility must flow among all of any system’s parts for its healthy functioning.

In order to reach such relations, a deep-rooted healing process among society as a whole is required, one in which not only doctors, but every person, is vigilant day and night to stand beside any person in distress.

In short, we will only be able to secure our society with mentally and emotionally healthy doctors when we accept our responsibility to build an emotionally healthy society—by forming positive human relations above all instances of division.
[259521]

Bnei Baruch—We Are Responsible For The Whole World
Podcast Powered by podPress (v8.8)