My article in Newsmax: “Rekindling Black-Jewish Relations in America Through Jewish Unity” 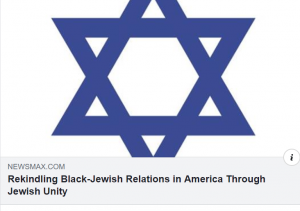 From rhetoric to actions, anti-Semitism from certain sectors within America’s black community has set off an alarm as a new disturbing phenomenon causing deep distress among U.S. Jews. As surprising as it may seem, the most effective solution lies among Jews themselves.

In the last few months, a sharp increase in unprovoked violent attacks against Jews by black individuals took place in cities with large Orthodox Jewish communities, particularly in New York and New Jersey, including the killing of three people at a Jersey City kosher market and a machete attack at a rabbi’s home in Monsey. Those officially-defined hate crime incidents were the most violent of recent links in a chain of harassment, beatings, and vandalism against Jews in those areas.

Anti-Semitism From All Fronts

We are familiar with extreme right-wing anti-Semitism from white supremacists, which blames Jews for helping immigrants, among other accusations. We have begun to address anti-Semitism from the Left, among the most prominent being the BDS movement, but lately we are becoming increasingly acquainted with a new kind of anti-Semitism from parts of the black community.

To further complicate the division, among African Americans there appears to be two distinct types of anti-Semitism. The first type arises from the Black Hebrew Israelites, a group whose members define themselves as “the original Jews,” as opposed to white Jews who are blamed for stealing their legal heritage. The second type seems to be arising from the melting pot of communal life in the U.S., where developing hatred against Jews claims that they want to take over their property and neighborhoods and “bring us back to the miserable slavery days.” It is a view that has even found sympathizers among members of the Jersey City Board of Education, the media has recently revealed.

It is important to understand that original Judaism had no interest in exclusive ownership of the Torah. On the contrary, it was intended to reach everyone in the world, particularly anyone who longs for unity and mutual guarantee. Anyone who wanted to live according to the great rule of the Torah, “love your neighbor as yourself,” was welcomed and we would all unite and embrace one another in great joy. As Kabbalist Rav Yehuda Ashlag (Baal HaSulam) wrote: “It is certain and unequivocal, that the purpose of Creation lies on the shoulders of the whole of the human race, black, white or yellow, without any essential difference.” (The Arvut)

Therefore, the claims of those from the first group who claim that “Judaism is mine” and “I fit but you do not” are basically discriminatory. Such an attitude, from whoever it originates, does not derive from real Judaism which calls for love of the other. The second type of anti-Semitism in the black community mentioned earlier belongs to the exclusionary anti-Semitic line of thought just described.

As we have seen throughout history in every period, some particular groups of people hold a grudge against the Jews and find their rationale for hatred. Baal HaSulam wrote about it as follows: “The hatred precedes all reasons, but each merely resolves its loathing according to its own psychology.” (The Writings of the Last Generation)

Therefore, it is quite easy to incite any oppressed group into believing that Jews are responsible for their bleak situation and that they have to act against them. Undoubtedly, the members of such a group will gladly espouse hatred for the Jews.

Jews Paving the Way to Unity

When the people of Israel overcome their differences, they attain a degree of spiritual unity that reveals the upper force. At this time, a positive force emanates from them. They then spread “light unto the nations” and become a beacon of peace for all. On the other hand, when Jews make no motions toward unity, but instead let their differences separate them, the nations of the world feel it subconsciously. This is because everyone is connected in a single network. In the absence of the positive upper force, the negative force begins to bubble through. Instinctively, the world manifests hatred toward the Jewish nation, holding it responsible for the lack of balance between the two opposing forces. This is the underlying reason for the increasing anti-Semitism.

We can engage in all kinds of efforts that do not primarily focus on our unification in order to try and palliate this phenomenon, but they will bring about no meaningful and lasting positive changes. Anti-Semitism will only continue increasing unless we tackle it at its root through the only possible antidote: unity of the Jewish people, first and foremost, and then unity of the rest of the world. Such an intervention will neutralize all animosity toward us, and will bring about a peaceful existence and cordial relations among all people.
[258674]

The Creator Is Within Connection