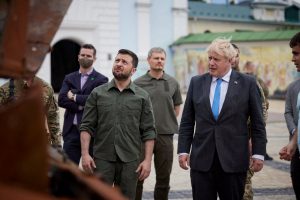 In a spectacular show of accord, Britain’s Prime Minister Boris Johnson’s entire government resigned leaving him in an untenable position which forced him to step down. On the face of it, the conservative party did the ethical thing and ousted its mischievous leader, who made a mockery of the Covid rules that he himself had legislated. However, I think that at least to a point, we should judge rulers more by what they do for their country, and less by how they behave as individuals. In the case of Boris Johnson, I think his leadership was good for the UK, good for America, good for Europe, and good for Israel, and I believe we will regret his departure.

For years, I had been saying that it is in the best interest of the UK to break away from the EU. Finally, after many years of hesitation, Britain found in Johnson the resolute leader to deliver Brexit. When the dust of minor scandals settles, this feat will remain as Johnson’s legacy, and I believe that Britons will hold it in his favor.

Ukraine is already lamenting Johnson’s departure, as he was a staunch supporter of it in its war against Russia, but there are those who say he might still return as head of NATO. I am not “in the know” when it comes to politics, but if this were to happen, it would benefit Europe.

Johnson’s views on how the world should run were advanced and constructive. Now that he is leaving, there is no doubt that the next prime minister will be less assertive and not as strong, and I think it is bad news for the UK and bad news for the world.

The problem is not only the ousting of Boris Johnson. Many people, and not only in the UK, feel disenfranchised and disillusioned with politics. They feel powerless and have lost hope in their ability to influence how their country is run, even though they are ostensibly living in democratic countries. As a result, people are losing interest in politics altogether. In my opinion, the media and politicians have a lot to do with it. They are deliberately confusing the public to the point that regular people, who could otherwise make educated decisions and draw serious and intelligent conclusions about their leaders, find it impossible to understand what is going on and simply give up.

I think that if people want a political system that works in their favor and does not exploit them, they need to focus on themselves rather than expect politicians to be attentive to their needs. If people focus on the connections between them, on enhancing their solidarity and cohesion, that mindset will percolate upwards. Politicians, in the end, need the people’s favorable views. If they see that people appreciate solidarity, they, too, will embrace it.

As I said above, Boris Johnson was good for Israel. Whether or not his successor will continue his policy regarding Israel remains to be seen, but it is clear that whoever comes next will have to reexamine the UK’s relationship with Israel. There is no doubt that Israel will continue to be a point of interest to the UK, as it is a point of interest to the entire world, but the policy of the UK’s next PM remains to be seen.

It is hard to tell what will unfold in the short run, but in the long run, the rule is that countries succeed and prosper when they maintain good relationships with Jews in general, and with Israel in particular, and do not prosper when they turn against Israel and Jews.

In the UK, the Conservative Party has been more favorable toward Israel than the Labour Party. This was particularly evident while Jeremy Corbyn was head of the Labour Party, as the party leaned heavily toward the Palestinians and against Israel. It is therefore only natural for me to hope that in the next general election in the UK, the Conservative Party will win again and the next PM will come from its midst.

Additionally, in recent years, it has become evident that by and large, Conservatives lean toward more traditional views concerning diplomacy, society, and family. The Left — most of whom vote Labour — advocates “progressive” views which increase the social instability and the confusion that people feel, as I mentioned above. For this reason, I believe that regardless of Israel’s interests, it is in the interest of the UK that the Conservative Party remains in power also after the next general election.

The Creator Operates In the Entire World

“Neither Biden nor Obama or Any Other Leader – There Is Only One Superpower” (Linkedin)
Podcast Powered by podPress (v8.8)