“What The US Stands To Gain” (Medium)

Medium published my new article “What the US Stands to Gain” 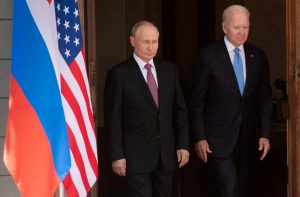 On Wednesday, Ukraine’s president, Volodymyr Zelenskyy, addressed the United States Congress. Zelenskyy “pleaded with the United States to ‘do more’ by implementing a no-fly zone, providing additional aircraft and air defense systems, and creating a new security alliance.” Shortly after the speech, President Biden pledged “$800 million in security assistance,” including “800 Stinger anti-aircraft systems, 100 drones,” and other weapons and ammunition.

The Americans are very cautious. So far, they have not given fighter jets to Ukraine, and prevented Poland from giving it 28 MIG-29 jets, arguing that it might push the war toward a global conflict since Poland is a full member of NATO. Despite Zelenskyy’s request, the US did not declare a no-fly zone over Ukraine in order to avoid a direct conflict with Russia.

Judging by the results, I think that the US has so far conducted itself correctly. Their intelligence regarding Putin’s intentions seems to have been correct, and their analyses of the unfolding situation seem to prove themselves. They deserve credit for this.

Currently, the US is definitely gaining from the situation. Along with its allies in NATO, it is wearing Russia out, exhausting its military strength, and depleting its resources in a war it cannot win. America’s goal is simple: to empty Russia of arms, ammunition, and supplies, and silence it for a long, long time.

I do not think that the US or NATO have any plans to invade Russia or occupy any of its territories. It is more of a preventative measure than a strategy of offense.

The US already controls NATO. Once Russia is out of the global power game, it will leave only China to deal with, and in my view, America does not regard China as a military threat.

It is not as though China does not want to dominate the world, because it does. However, the Chinese do not have an inherently aggressive approach. They want to dominate through their labor power and purchasing power rather than through military occupation. In my opinion, they will succeed.

The saddest part of the story, however, is the Ukrainian people. No one cares about them; they are the cannon fodder in this war. The US is using them to exhaust Russia and drain its power, the Russians are destroying Ukraine in an effort to prove their strength until none of it is left, and in between, the Ukrainians are being killed in droves and their country devastated.

At the moment, the US has no interest in ending the war, not before it has achieved its goal: Russia’s depletion. Therefore, in all likelihood, it will continue to support Ukraine just as much as is needed for it to keep fighting, but not to win. If Ukraine defeats Russia before the Russian army has been eliminated, then the US will not have achieved its goal. Therefore, the grim conclusion is that the longer the war continues, the better it is for the US and NATO, and the worse it is for Russia and Ukraine.

This war is terrible, as is any war. Regrettably, humanity does not learn any other way. All the lessons we have learned, we’ve learned through pain. Now, too, humanity is learning a painful lesson: military power does not win wars.

Despite their inconceivable inferiority in soldiers, weapons, training, resources, and every military aspect one can think of, the Ukrainians are not only hanging in there, but are gradually moving on the offense. They are fighting for their country, and Russia’s warplanes, tanks, and warships are no match to their unity and determination. The lesson we should all learn from this war is that in the end, solidarity and mutual responsibility will triumph; these are tomorrow’s tools for success. What a shame it is that the tuition comes in the form of human lives and misery.
[295488]

“The Price Of Freedom” (Medium)

“What Is Purim? Why Is It Significant?” (Quora)
Podcast Powered by podPress (v8.8)