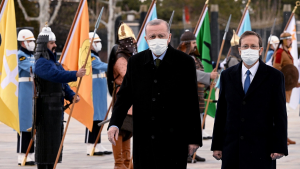 Last week, Turkey’s president, Tayyip Erdogan, hosted the president of Israel, Isaac Herzog, in his palace in Ankara. The purpose of the festive meeting was to end fifteen years of cold and often hostile relations. There have been previous attempts to thaw the relations between the two countries, but for various reasons, it did not happen. I hope that this time it will succeed.

There are many good reasons to warm up the ties between Israel and Turkey. The economy is the most obvious reason, and probably the most important. The economy sustains the entire world. It sustains every country and every family, and I think that a sense of mutual dependence among people and nations is good. This is why our sages wrote, “Go and make a living off of each other” (Sanhedrin 16a), since this kind of connection is the safest.

Also, in a sense, Turkey and Israel have a lot in common. Both countries are “somewhere” between east and west; and both are looked upon as “outsiders” by NATO, even though Turkey is a member and Israel is officially a Major Strategic Partner. Therefore, we have a mutual interest in collaborating; we can really assist one another.

As for the conflicts of the past, I think they were necessary and, in retrospect, even helpful, as they now form the basis for our rapprochement. If we had had no disagreements in the past, we would have nothing to overcome, no distance from which to draw closer. Consequently, it would be impossible to create closeness. Now that these differences have subsided for some time, it is possible to rise above them and form a strong bond between us.

Besides the economy, there are other ways we can help each other out. We can help each other in international relations, in various technological developments, and in many other areas. Moreover, traditionally, Turkey and Israel have never been on particularly bad terms; there is no inherent hatred between us, no historical enmity. But even if there were such antagonism, it would be just another impetus to cover it with friendship, as I just mentioned.

On a more personal level, I have been to Turkey several times in the past, and wherever I went, I did not sense any negative feelings. The Turkish are very civilized people. They are an ancient nation, very powerful, and I do not think we should have any problems with them.

The disputes of the past are just politics. And the good thing about politics is that it changes quickly, while the inner feelings remain. Therefore, I think we can look to a better future, learn from the past, and cover all the crimes with love.
[295120]