“Between Despair And Hope” (Linkedin)

My new article on Linkedin “Between Despair and Hope” 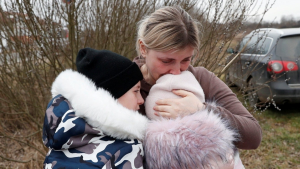 Tens of thousands of civilians cross Ukraine’s borders every hour, a mass of people laden with bags on their backs and children on their shoulders, with suitcases and memories dragging behind them.

I have many students and friends in cities all over Ukraine, from Kiev to Kharkiv, from Odessa to Lviv. I receive reports from them and follow their situation with concern. They tell me how they sought shelter in cold basements or fled to nearby villages, others sped westward in their cars for hours, praying that they would not run out of fuel and manage to escape.

The United Nations Refugee Agency (UNHCR) estimates that more than 500,000 Ukrainians have fled their homes as a result of the conflict, crossing the borders into neighboring countries such as Poland, Hungary, Moldova and Romania.

I have no doubt that the refugees will receive support and a warm embrace in Western European countries. I also believe that they will eventually return home and not stay permanently in host countries. Canada among others may open its doors to permanent immigration.

Israel, too, will surely act in accordance with the Law of Return, which gives Jews the right to relocate to Israel, and open its arms to welcome them. Israel has a place not only for the thousands of Jews who will emigrate from Eastern Europe, but for all Jews of the Diaspora.

Meanwhile, the world, including Israel, is helping with humanitarian aid to those affected by the conflict. But besides meeting people’s basic needs, the most important help is inner support. We must ask that the spirit of love, bestowal and positive connection will soon prevail.

Disagreements and wars come so that we can unite above them. Only the unity of hearts, when each cares for the well-being of the other, will save humanity.
[294613]

What Is Happening In The World?
Podcast Powered by podPress (v8.8)