“When The World Votes Unanimously Against You, It Is Time To Wake Up” (Linkedin)

My new article on Linkedin “When the World Votes Unanimously Against You, It Is Time to Wake Up” 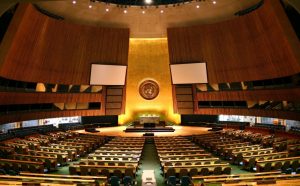 About ten days ago, the UN General Assembly voted 160-1 in favor of a draft resolution to renew funding for UNRWA, the UN Relief and Works Agency for Palestine. Hidden within the six items of the resolution were clauses stating that “refugees [from 1948, including their children and children’s children] wishing to return to their homes and live at peace with their neighbors should be permitted to do so at the earliest practicable date.” The resolution also states that “compensation should be paid for the property of those choosing not to return.”

Following the vote, the draft was referred to what is known as the “Fourth Committee,” to formulate the resolution that will be submitted to the UN General Assembly on December 1 for a final vote. If the resolution is adopted, and it will be, it states that its “recommendations” are to be implemented by September 1, 2022. De facto, this means that the UN has decided to terminate the State of Israel as a Jewish state.

If there is anything good about this decision, it is that we can finally see how undesirable we are in the eyes of the world, and I always prefer the bitter truth to sweet lies. I think that in the near future, we will see the UN calling on all “residents” (a PC word for “Jews”) who are not indigenous to the region and moved to Israel over the past century and a half to return to their original countries. I am certain that the UN will even assist in their return, as this is what the world wants.

Despite the seemingly hopeless situation, I believe that our greatest concern and the key to saving the country is not the UN’s decision but our own opinion about it. It is bad enough that the world voted unanimously against us, but it is nothing compared to our real problem, that we tacitly agree with the UN. This is why we have not protested or plan to protest, why we have no plan to stop the final resolution, and no desire to bring the matter up for public discussion. Most Israelis do not even know the resolution exists.

No one will benefit from the abolition of the State of Israel. Before the State of Israel existed, we had two world wars in just over two decades. The State of Israel was established so that Jews could fulfill their historic role. Even if Israelis are unaware of this and the world has given up on Israel, the Jews will not be relieved of their calling.

We are a nation forged by unity above huge chasms, and we were designated to set an example to the world that such unity is possible. That is why the State of Israel was established soon after the most horrific display of hatred among nations in history, which ended in nuclear explosions. If Israel fails to live up to its vocation, what will stop the world from repeating that scenario?

If we justify our existence here by striving to unite as our ancestors did, above the huge chasms among us, we will not need to explain anything to anyone. On the contrary, the world will stop anyone who tries to disrupt our work toward unity.

Just as the world watches our every move and condemns us now that we are divided, it will watch our every move and praise us when we are united. This UN resolution is proof that the world wants none of the myriad things we have given it. It is time to give it what it really needs: the ability to unite. And the world will be able to unite only if we lead by example.

For more on the importance of Jewish unity, see my book The Jewish Choice: Unity or Anti-Semitism.
[290083]

“Consideration – The Buzzword That Will Mark The Change” (Linkedin)

New Life 1322 – How Can We Restore Our Emotional Balance?
Podcast Powered by podPress (v8.8)