My new article on Linkedin “Silence Is Golden” 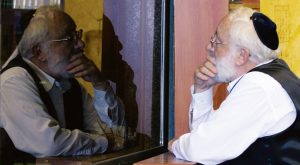 I spent countless hours conversing with my teacher, Rav Baruch Shalom Ashlag (RABASH). For the most part, we spoke when we were alone during our daily morning walks or during our frequent two-day trips to Tiberias.

I once asked him what he did before I came, since when I met him he was already seventy-three years old. He said, “I was alone.” When I asked him if he didn’t need to talk to someone, he simply said, “No.”

Today, thirty years after his departure, I understand what he meant. I sit alone in my room and feel no need to come out or speak with anyone. I could sit here for a hundred years and not mind it whatsoever. I take strolls here and there, but since the closures started, I am mostly by myself, and I am perfectly content. Were it not for my students or the necessity to spread the wisdom of Kabbalah to the world, I wouldn’t utter a word.

In this I am like many Kabbalists before me. They, too, did not spend their days in idle conversation. They studied together and read from authentic Kabbalah sources.

This was also what RABASH and I used to do. Even when we were alone, such as in Tiberias, we would sit facing each other, The Book of Zohar or The Study of the Ten Sefirot open on the table between us, cups of Turkish coffee next to them, and we would read, and read, and read.

Once in a while, RABASH would stop reading to explain something, or I would ask a question about the text, but for the most part, we would read and connect between us, rising to a shared, spiritual feeling. Noting more was needed, nothing at all.

When an important event occurred, such as a war or elections in Israel, or other events that stirred the Israeli public, we would exchange a few words about it, but not for long, and certainly without prattling about it. We would not veer off from thinking about life’s purpose for a moment; every second mattered.

It is written in the Mishnah that Shimon, the son of Rabban Gamaliel, used to say, “All my days I grew up among the sages, and I have found nothing better for a person than silence. Study is not the most important, but deeds; and one who speaks too many words brings about sin” (Avot, 1:16).

Kabbalists are silent because they listen with their hearts. They listen to our common heart, the heart of the human system called Adam HaRishon, of which we are all parts.

We are born locked inside the bubble of our ego; we cannot listen to our common heart. Instead, we only listen to ourselves.

What I had learned from RABASH is to listen deep within, beyond the ego, to the common heart. In the depths of our soul, there is a longing to break through the boundaries of ego and feel the common heart. When we connect with it, we will truly be able to hear what is outside of us. We will be able to converse with the soul of all of humanity, with all of nature, and through them with the Creator.

“The Canopy – How Jews Can Break The Spell Of Antisemitism” (Linkedin)