“Look Beyond The Screens” (Linkedin)

My new article on Linkedin “Look Beyond the Screens” 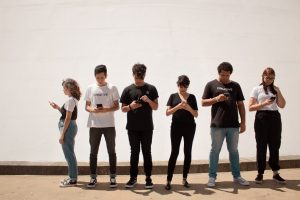 The necessity to switch to virtual learning turned out to be a formidable challenge. The majority of teachers feel that teaching virtually is inefficient and harms both children and educators due to difficulties in communication and lack of physical contact. But is it really all that bad? When children are with each other, they’re in the screens. When they are alone, they’re still in the screens. Instead of speaking on the phone, they speak and chat at the same time through apps on their mobile phones and laptops. Are they really disconnected or do we simply not understand their connections?

I think it is we, dinosaurs, who are uncommunicative because we’re stuck in our old ways and can’t adapt to using virtual communication. Youngsters, on the other hand, use mobile phones and laptops as if they are parts of their own body. If we knew how to use the platforms they use, we wouldn’t think that they are uncommunicative or disconnected, but that they do it differently from us. We would realize that it is we, dinosaurs, who are the misfits.

It is true that many youngsters suffer from depression and other emotional issues. However, it is not because they don’t want to connect or that they can’t connect. It is because we are imposing on them a system of communication that is suitable for us but not for them. When they can’t handle it, we “diagnose” them as having ADHD and other dysfunctions. But it is mostly because we can’t offer them the platforms where they are happy to communicate and do it easily and gladly.

Instead of making them do things the way we think they should, we should tap into the means they are already using and teach them where they already like to be—the virtual realm. Just as there are plenty of online games for fun, and plenty of online courses and tutorials that are fun to learn, there can be plenty of educational programs that teach K12 children everything they need to know, and in a way they like to learn.

Additionally, since they already communicate via the internet, why not keep it that way and find more engaging ways to get them involved? The fact that Zoom was available when schools were forced to shift to virtual learning doesn’t mean that this should be the platform to be used going forward. Children know how to create personal relations and how to convey true feelings through virtual connections. Now educators need to learn how to convey knowledge, support, and guidance through the same channels.

Reality won’t reverse course; it moves only forward. We will all have to adapt; the only question is at what cost to our children. The faster we grow out of our obsolete habits and look beyond the screens at the young hearts pumping behind them, the happier our kids will be.

“Day And Night” In The Work Of The Creator
Podcast Powered by podPress (v8.8)