“The Engine Of History” (Linkedin)

My new article on Linkedin “The Engine of History” 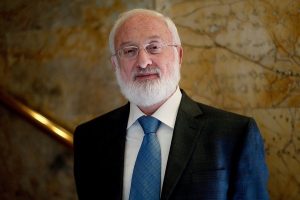 Over billions of years, the universe evolved from a tiny speck into a mammoth structure whose vastness no human can perceive. On a miniscule planet in the midst of the vast universe, life began to evolve some four billion years ago. Over the eons, life evolved smoothly in its course, generating minerals, plants, and animals. There was no apparent reason for the process, but it went on to develop increasingly complicated creations. Only very recently, in the last 5,000 years or so, did the reason manifest: The universe evolved toward creating man, who is to evolve and become like the maker of the universe, and thereby complete the circle of creation—from maker, to man, to maker.

The purpose of creation was initially known to few, but they developed manners of explaining it to many. The wisdom those few had learned became known as the wisdom of Kabbalah, which means reception, since it teaches how to receive the ultimate knowledge, that of the maker of the universe.

As the wisdom evolved, so did humanity. When Abraham came along and developed his wisdom, writes Maimonides in Mishneh Torah, he wrote it in books such as The Book of Creation and other books that did not make it to our time. Nevertheless, his teachings reached countless people in his homeland Babylon, Canaan, Egypt, and elsewhere in the Near East. His teaching was simple: Be kind and caring to others, and you will discover the secrets of the maker of the universe, or as Maimonides depicted it, “the leader of the capital.”

While Abraham was teaching, Babylon went through a profound social crisis and its people became arrogant and alienated from each other. The book Pirkey de Rabbi Eliezer describes Abraham’s impressions from watching the builders of the Tower of Babylon: “Abraham, son of Terah, went by and saw them building the city and the tower.” He tried to speak to them and tell them about the benefits of caring over alienation “but they loathed his words,” says the book. Yet, when “They wished to speak each other’s language” as before, when they were still united, “they did not know each other’s language. What did they do?” asks the book, “They each took his sword and fought one another to death. Indeed,” concludes the text, “half the world died there by the sword.”

Later, the chronicles of the people of Israel in Egypt tell the story of Moses’ struggle to unite the people of Israel, redeem them from Egypt, and teach them Abraham’s wisdom. Like Abraham, Moses did not intend to keep the wisdom exclusively for Israel. He wanted the entire world to benefit from it. In his commentary on the Torah, the great Ramchal writes, “Moses wished to complete the correction of the world at that time. This is why he took the mixed multitude, as he thought that thus would be the correction of the world … However, he did not succeed because of the corruptions that occurred along the way.”

Other historic events followed key points in the development of the wisdom of Kabbalah. The writing of The Book of Zohar took place soon after the ruin of the Second Temple, when the Jewish people began their two-millennia long exile, and Christianity was but a nestling faith. A long history of persecution and oppression was to begin, and the fall of Rome was nearing, along with the Hellenistic culture that ended the Jewish sovereignty in the land of Israel.

For more than a thousand years, The Book of Zohar had been hidden. Toward the end of the 13th century, it reappeared and a new era had begun. The Middle-Ages were coming to a close. When a young kabbalist by the name of Isaac Luria came to Safed, in Northern Israel, in the middle of the 16th century, he began to teach Kabbalah like none other had done before him. At around the same time, novel ideas were spreading throughout Europe: The Renaissance was gaining ground, and Martin Luther’s Reformation was challenging the authority of the Catholic Church.

The teachings of Isaac Luria, who became known as the ARI, remained in the twilight for centuries and very few were privy to them. It was only in the 20th century that the wisdom of Kabbalah became more accessible. In the 1940s and 50s, a kabbalist by the name of Yehuda Ashlag explained in detail the teachings of the ARI in his comprehensive six-volume The Study of the Ten Sefirot, as well as the The Book of Zohar in his Sulam [Ladder] commentary. As before, the years when Ashlag, who became known as Baal HaSulam, worked on his commentaries were fateful years for humanity. In Ashlag’s time, three major ideologies struggled for world dominance: Capitalism, Communism, and Nazism. The result of their struggle was the Second World War with all its horrendous consequences.

The teachings of Baal HaSulam, for all their relative clarity, compared to his predecessors, still did not become known far and wide as he had wished. As he said, the generation was not ready for it.

Now it is. We are the first generation that is beginning to implement the principles that Abraham had taught and that Moses wished to spread around the world. In our generation, the wisdom of Kabbalah—the wisdom that teaches how the world was made, how it operates, and how we can become like its maker—is taught throughout the world, and everyone is welcome. Anyone can read the books, watch the lessons, practice the method with others, and achieve what the wisdom enables.

The engine of history, which has driven every process since the dawn of time, is now open to everyone, like an open-code program that anyone can come and learn. The texts have been translated into dozens of languages, the lessons are accessible online and for free, and curious people from around the world are bonding around Abraham’s tenets: Be kind and caring to others, and you will discover the secrets of the maker of the universe, or as Maimonides depicted it, “the leader of the capital.”
[286287]

Destructive Force Of Our World