“The New Race For Space” (Linkedin)

My new article on Linkedin “The New Race for Space” 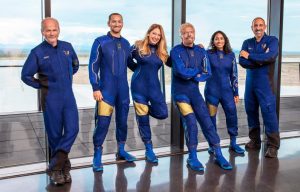 Jeff Bezos, owner of Amazon and one of the world’s top contenders for the title “the richest man on Earth,” is racing against business magnate and investor Richard Branson, founder and owner of Virgin Group, which controls more than 400 companies in various fields. Their goal is to beat one another to outer space in vessels built by companies they own. The race between them has generated significant backlash, including a petition that states that if these two billionaires reach space, they should not be allowed to return.

Indeed, man’s ego knows no boundaries. It transcends all of nature’s forces. Man wants to devour everything: the planets, the stars, the galaxies, the entire universe, to have it all inside and leave nothing for others. In fact, everyone else should be inside of me, as well. Billionaires are people with a hyper developed desire for wealth, power, and status. They will go any length to beat anyone who challenges them, even if only by a few days, as is the case with the race discussed here. Such people have one thing in mind: to be on top.

Even so, I think that signing such petitions as the one being spread now, that we should not allow them to return from space, is not only impractical, but unwise. We may not like them because we envy their wealth, but they still provide work for millions of people. They drive our economies, promote technological innovations, and all of us benefit from their efforts to gain personal power. Therefore, however selfish they are, in the end, everyone benefits from their achievements.

We could argue that their achievements come at our expense, and at least partially, that would be true. However, currently, this is human nature. We are all built to work this way, and had we been in their shoes, we would have done the same. It is involuntary and therefore should not be held against them.

If we want to change them, we have to change everyone; we have to change human nature, and we can do that by changing human society. Currently, we only want to change them and not ourselves, but we don’t see that the same ill-will that makes them exploit others causes us to resent them. Our envy of them testifies not to their corruptness, but mainly to ours. If we want to eradicate their corruptness, we must eradicate corruptness in all of society, including ourselves. If we agree to change ourselves, we will be able to change others, and then all of society will be harmonious and equal. There will be no exploitation not because of some regulatory measures, but because people will not enjoy exploiting; they will enjoy contributing and sharing.

Therefore, as always, the correction begins with us. We, too, must understand that we are living in an interdependent system, where if I hurt one person, animal, or object, I am really hurting myself. Just as our body is a system where no organ wants to harm another organ, so, too, people should behave with one another. But because we don’t want to connect, we cannot see how connected we are. As a result, we harm one another and thereby ourselves. This is all the learning we need in order to lift this world from the manic depression it is in, to calm, peace, and harmony. But the work begins with us.
[284658]

From Suffering To Happiness