“We Made The Bed, And We Will Lie In It” (Linkedin)

My new article on Linkedin “We Made the Bed, and We Will Lie in It” 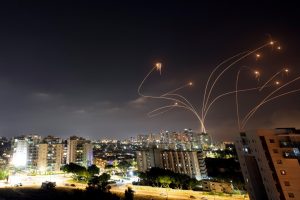 Over the past year, I repeatedly said that if the leadership changes in Jerusalem and Washington, Israel will be in trouble. To some of my social media followers, it sounded as if I was making political commentary or promoted a political agenda, but this is not the case. I gain nothing from this or that individual being the head of the State of Israel, and certainly not from the identity of the president of the US. Rather, my one and only concern is the unity of the people of Israel, as a springboard for instigating the unity of all of humanity.

The implicit, and sometimes overt support of the Biden administration for these acts of violence are the most worrying, since they are the harbinger of far more vicious storms to come. In fact, the Palestinians are the least of our problems. Now that the US administration has opened the floodgates for antisemites around the world, we can expect onslaughts from Iran, Russia, Arab countries, and basically from everywhere. We will lose on all fronts and our situation will go from bad to worse.

The end goal for humanity is to be “as one man with one heart.” It may take us decades of unbearable torment, including a nuclear world war, to get there, or it may take a few short years and a pleasant and swift ride into a society whose members care about each other and are committed to the well-being of humanity and the planet. My concerns, therefore, are spiritual and not political, and certainly not partisan.

Yet, since it is impossible to establish unity without security, before we establish unity, we must secure the persistence of the State of Israel and the security of its people. As I see it, Benjamin Netanyahu has done a far better job at keeping Israel safe than any other prime minister. Across the Atlantic, Donald Trump has done more for Israel’s security than any other American president. Because security is the most essential requirement for establishing unity, I supported both of them.

Accordingly, even before Joe Biden took office, I warned that should he win the election, Israel’s security would be jeopardized. Sadly, as soon as he entered the White House, my prediction began to transpire. The return to the Iran deal, the growing support of the Palestinians, the tacit permission his administration has given to various organizations to attack Israel, such as the International Criminal Court, the UN Human Rights Council, the UN Security Council, and countless others, all seeking to sanction, censor, weaken, and ultimately demolish the Jewish State, are only the beginning.

The riots we are seeing in Jerusalem, Haifa, and Jaffa, as well as the rockets from Jaffa on civilian population seem to stem from various reasons: The Sheikh Jarrah evictions, tensions surrounding the Temple Mount, the threats of Hamas to escalate the violence, and incitement for violence on social media, are a few of them. However, the implicit, and sometimes overt support of the Biden administration for these acts of violence are the most worrying, since they are the harbinger of far more vicious storms to come. In fact, the Palestinians are the least of our problems. Now that the US administration has opened the floodgates for antisemites around the world, we can expect onslaughts from Iran, Russia, Arab countries, and basically from everywhere. We will lose on all fronts and our situation will go from bad to worse.

However, and this is the most important point—I don’t see the Biden administration as the guilty party in this downward spiral. Rather, I think we brought this on ourselves. American Jewry, as well as much of the public here in Israel, wanted Biden to win. They wanted to unseat Trump and place Biden and his progressive administration in the White House. Well, we made the bed, and now we’ll lie in it.

As Jews, we do not understand the power we possess. I am not even talking about political clout and maneuvers that prominent Jews took in order to bring Biden to the White House; I am speaking only on the deeper level. With our desire, we seated Biden and unseated Trump, and all the Jews will pay, including the American Jewry.

The division among Jews is the malady of our people. It has brought upon us every evildoer since the onset of our nation. The division among us also prevents us from winning the world’s favor, since all that they expect from us is unity, and all we ever show them is division. That division causes us to want to see Israel haters in the White House, and makes us cloak our hatred for each other with sanctimonious outcries about justice. But where there is no love, there cannot be justice.

Let me reiterate: I do not speak from any political perspective, but from my spiritual perception of the world. If we want to see a peaceful world, where people are united, we must establish security and unity, in that order. And since the unity of the world begins with unity within the Israeli nation, there must be security in Israel so that Israel may establish unity.