My new article on Linkedin “The Pending Victory” 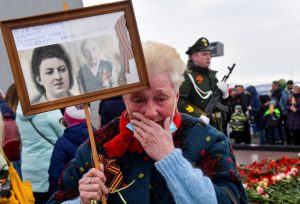 The Red Army’s victory over Nazi Germany in World War II was a great victory. The recent 76th anniversary celebration of the important historic event should be also a reminder of the atrocities of the Nazi regime which acted with visceral hatred towards entire populations and especially against the Jews. Humanity overcame the rise of this pernicious force, but there is still work to be done to defeat the underlying origin of wars and conflicts: our egoistic human nature of self-benefit that causes division and hostility.

We must remember and relearn that we, the Jewish people, have a special role among the peoples of the Earth—to defeat the evil instinct that separates us from one another, and to strive tirelessly for connection that will defeat hatred forever. In this way we will fulfill our mission in the world and claim the most important victory ever: lasting peace and prosperity.

We have not learned much from history, neither the people of Israel nor all the nations. Even today Nazi parties can be found everywhere, and somehow we come to terms with the situation that antisemitism is rising again, albeit not as it was then. We should be clear that based on the growing manifestations of hatred against Jews, that there will be no problem in establishing a government today similar to what existed in Germany before. Such a scenario would not necessarily threaten just the people of Israel in the State of Israel, but Jews everywhere in the world.

Russia’s Victory Day was a huge success against the destructive Nazi regime, against the well-oiled war machine that came out of Germany, but the ideology itself was not defeated; it is alive and kicking. On May 9, 1945, the world received a beautiful lesson, that if many peoples stand together in unity against those who break all agreements and conventions of human civility—like the actions perpetrated by the German regime—then they will succeed. However, we must recognize that we are still lacking treatment of the root of the problem that is still in our midst.

The Russians are by nature a people capable of connecting in a time of need and of standing up against their haters. Hitler was a fool to try to go against them, and many advised him not to, but he thought he would succeed, that he would be the only one in history who could defeat them. He failed.

One and a half million Jews from Russia also joined the Red Army, enlisted in the struggle and fought against the Nazis. In spite of that, over the years the Russians became distinctly antisemitic. They learned from the Germans to hate Jews, and the growing hatred, together with the plethora of difficult living conditions in the former Soviet Union, built within the Jews a strong desire to leave Russia and move to Israel.

I myself was among those who immigrated—I remember well those times. It was the late 1960’s, from the Six Day War and onwards. It was already felt than that the emerging Jewish state had a solid foundation. It was felt that Israel could endure the rising challenges it faced through the determined mindset of soldiers and hard workers needed for the new nation to thrive. Many Russian Jews related to this vision and expressed a desire to join this cause and call to action. But even the establishment of the state of Israel did not help to remove the hatred that still clings within our hearts, and it continues to haunt us.

Russia’s Victory Day over Nazi Germany is a day worthy of respect for the heroes of that war who stood together and fought bravely. And at the same time, we need to ask a very important question: Why does the same hatred still stand with all its bitterness, and how do we begin to sweeten it from this day on?

We must remember and relearn that we, the Jewish people, have a special role among the peoples of the Earth—to defeat the evil instinct that separates us from one another, and to strive tirelessly for connection that will defeat hatred forever. In this way we will fulfill our mission in the world and claim the most important victory ever: lasting peace and prosperity.

“We Made The Bed, And We Will Lie In It” (Linkedin)