“The Crime Of Being Jewish” (Linkedin)

My new article on Linkedin “The Crime of Being Jewish” 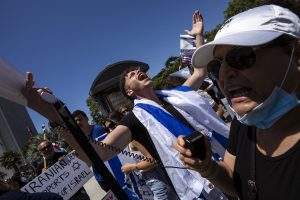 “Dirty Jew,” shouted a man in New York’s Times Square while he punched, kicked, and pepper-sprayed a young Jewish man who ended up in the hospital as result of the recent unprovoked attack. “I would do it again” said the pro-Palestinian aggressor after being arrested and briefly held in custody, according to prosecutors. That is today’s America. Rampant widespread antisemitism aggravated by the latest escalation of the Israel-Gaza conflict. It is a turning point for the Jewish people to either wait for the worst to happen or unite and survive and live happily and safely.

As humanity progresses and becomes more enlightened, hatred of Jews becomes less logical and at the same time expands and deepens. Hatred no longer belongs to a people or to a transient union of peoples, but it is spreading throughout the entire global world almost at once. Never has the condemnation of Israel and hatred of the Jews been as open, unequivocal and extensive as it is today. If once hatred was hidden, except in times of particular outbursts, today it roams shamelessly in the streets; Jews are brutally beaten simply for being Jews and no one seems to even try to stop it.

What would be considered inconceivable in the past is now a reality: American Jews are afraid to wear yarmulke in public, as confirmed by the Jewish Federations of North America. Unfortunately, history has shown us that our enemies will leave no stone unturned until they fulfill their goal: to cause harm or annihilate Jews wherever they are. To hide, assimilate, and try to become like everyone else will not help.

Why? Because Jews are not like everyone else. We must carefully study our history and exemplary sources and stop repeating the same mistakes of continually minimizing the threats with blind and unconscious stubbornness that brings us murderous blows.

The people of Israel are different because they are not a group of people born in a common region. We do not share a common culture, mentality, and similar tendencies. We are a collection of people from every nation, descendants of Mesopotamia, ancient Babylon, who gathered around the ideology developed by our ancestor Abraham: a connection between human beings over differences that divide us.

Abraham came up with the idea of unification from the deep confusion and discord that prevailed in the kingdom of Babylon. Abraham trained us to unite as one man with one heart, not only to discover the positive, good and benevolent power that would improve our lives between us, but to become a model of a reformed society that would pass the idea of unity and in this way to radiate light into the nations, the peoples of the world. This is our fate; we have no other purpose and no possibility of escaping from it.

This is why the Jews in the Diaspora will not be able to assimilate into their homelands no matter how hard they try. And we in Israel must not think that we are any different or more united than them. We are also in exile. Not in body, of course. We are physically on the land of Israel, but the spirit, the mentality, the thought, are all completely in exile.

“Exile” is first and foremost a departure from the commandment to connect, a flagrant disregard for our destiny. When Jews live an egotistical routine, for their own benefit only, they become the greatest egoists in the world, exactly against their potential to be pioneers of the global connection.

In this mission there is no difference between us and the Diaspora Jewry. We all have one fate and we are currently very far from it. Everything can change at the speed of light. Change depends on a modest understanding that life has a purpose and it does not end with corporeal achievements, which only are accompanied by suffering and war. A little understanding that we were not born just to survive around seventy years in perpetual existential fear and then die, will help us to live differently, safely, peacefully, happily, purposefully. Only a little understanding, a subtle inclination, a good thought toward connection between us, will make a huge difference toward a more promising future for us and our children.

“Who Won The May 2021 Conflict Between Israel And Hamas, And Why?” (Quora)

We Need A Third Force
Podcast Powered by podPress (v8.8)