“Advancing From Conflict To Conflict” (Linkedin)

My new article on Linkedin “Advancing from Conflict to Conflict” 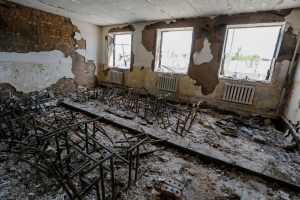 Last week, a water dispute between Kyrgyzstan and Tajikistan led to armed clashes that resulted in the death of more than 30 people, scores were injured, and more than 10,000 people had to flee from their homes. Those clashes were the worst in many years between the two countries, and while the fire has subsided for now, the situation is still very tense. Kyrgyzstan and Tajikistan are only the latest in a string of clashes that are becoming increasingly frequent and more intense, not only between countries, but also between factions within countries, as well as domestic violence. The world is clearly becoming a more violent place.

As intolerance grows, these conflicts are bound to grow even more frequent, and spread to countries that have so far been very calm and peaceful. Western Europe, Canada, and many other places that currently enjoy relative calm, will gradually lose that status and will become hotbeds of aggression, too.

As intolerance grows, these conflicts are bound to grow even more frequent, and spread to countries that have so far been very calm and peaceful. Western Europe, Canada, and many other places that currently enjoy relative calm, will gradually lose that status and will become hotbeds of aggression, too.

The culprit behind the escalation is, of course, the human ego. The more interconnected our world is becoming, the more the ego-driven conflicts in one place fuel conflicts in other places and the overall level of violence increases. Already, the violence has pervaded every level of society the world over. Unless we reverse the trajectory, it will come to the state that our sages described as “Man’s enemies are the dwellers of his own home” (Mishnah, Sotah, 9:15), and life will be unbearable.

Nevertheless, there is a purpose for our conflicts. If we understand it, we will be able to reverse the trajectory before we sink into the horrors of another world war, which many already regard as a plausible option. The purpose of the ego-driven conflicts is to impel us to rise above our ego, reject it, shun it, and choose unity despite our inherent dislike.

This may seem counterintuitive: Why must we hate each other first if the whole idea is to eventually love each other? The reason is that unless we experience hatred, we will not want to love one another and will therefore never come to it. We experience everything only through contrasts. Without the opposite of love, we wouldn’t be able to know what it is, much less want it. Just as we wouldn’t know the meaning of words such as “day,” “warmth,” “gentleness,” and “life” without knowing their opposites, we wouldn’t know the meaning of “love” without knowing its opposite.

Therefore, conflicts make sense only if they yield the opposite. If they only fuel more conflicts, they will end up destroying all of us. This is where humanity is going at the moment. We have no time to waste; we must start using the hatred that has already erupted as a lever for building its opposite.

If we think it is impossible, it is only because our egos tell us so. After all, living under a constant threat of violence is not possible either; we’d better get going.

“What Are Some Ways To End Child Abuse?” (Quora)