“Why Israel Is Heading For Another Election” (Times Of Israel)

Michael Laitman, On The Times of Israel: “Why Israel Is Heading for Another Election”

This week, Israel’s government collapsed, triggering (yet) another general election, the fourth in just two years. From the looks of it, this election will not be the last. As long as we don’t know the reason for the crisis, it will continue to shatter our society.

The crisis we’re going through is not political; it is first and foremost a social crisis, a crisis of social division at a time when we need unity more than ever. Instead of looking for ways to heal our society, we’re looking for personal gains. This is especially evident with politics, where individuals are searching for personal political career promotion and abandon any principle they championed and were elected in order to promote.

All this is happening when we desperately need to understand that our future depends on the level of our connection. Only if we are united we will succeed; alone, we will fail. At the moment, all I see is more blows approaching precisely because of our hatred for each other.

Nevertheless, there is a truism that what the mind does not do, time will do. We can wait until we’ve suffered so much and for so long that the pain will crush our pride and we will agree to look at one another differently and might even consider unity.

If there is anything good about the current situation, it is the fact that we are recognizing the gravity of the situation, the depravity of the system. We have sobered up, and this is great. Now the question is whether or not we will have the courage to face our own egos and understand that we must elect connection. If we do this, the political parties will follow our will. They are not the leaders, we the people are; by our will, we determine their platform, and by our will, we determine their actions. If we choose unity, they will find the way to work together. If we choose separation, they will never unite and will only seek to fail one another, and everyone will suffer in the process.

The people of Israel are an assortment of different, unrelated people who united under Abraham since they believed in his tenet that mercy and love must be the guiding principles of society. The practical implementation of these principles came several centuries later when the people united “as one man with one heart” at the foot of Mt. Sinai and established mutual responsibility. Immediately afterwards, we were tasked with being “a light unto nations,” to be a model of unity for the rest of the world.

But the ego hasn’t stopped growing in us, and demanded novel ways to tackle it. Finally, we succumbed to it and became hateful of each other for no reason at all. This unfounded hatred caused our downfall and exile for two millennia.

Now that we have been given sovereignty in the land of Israel once again, it was not in order to save the Jewish people from physical extermination; it was in order to allow us to realize our task: to unite and be a model of unity for the world, a light unto nations.

We aren’t doing this. And because we are not doing this, there is no justification for our existence as an independent country. If we do not get a grip on our egos and start working on our unity, the nations will regard the present they had given us on November 29, 1947—when they resolved to establish a Jewish state in Palestine—as a mistake, and then Israel will truly be in trouble. 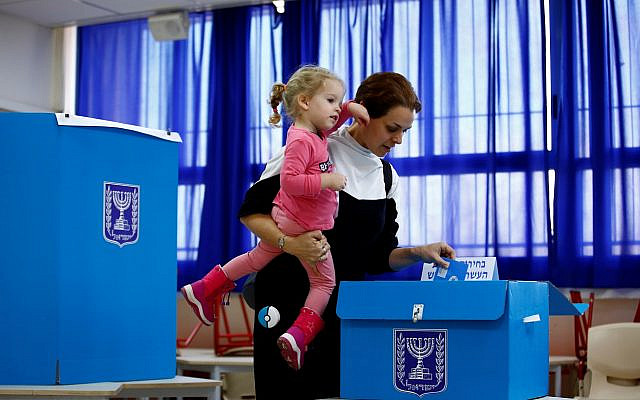 A woman casts her ballot as she votes in Israel’s national election at a polling station in Tel Aviv, Israel, March 2, 2020. (REUTERS/ Corinna Kern, used with permission)
[275951]

“A New Administration And The Prospects Of Peace For Israel” (Times Of Israel)
Podcast Powered by podPress (v8.8)