“You have stolen my dreams and my childhood with your empty words. Yet I am one of the lucky ones. People are suffering. People are dying. Entire ecosystems are collapsing. We are in the beginning of a mass extinction, and all you can talk about is money and fairy tales of eternal economic growth. How dare you!” Greta Thunberg

In straightforward, direct-style, stubborn, stutter-free tone, Greta Thunberg, the Swedish environmental activist, spoke at the United Nations Climate Change Conference, the global protest of young people against the neglect of the climate crisis. This girl, who suffered from depression at the age of 11 and stopped speaking; who was diagnosed as having Asperger syndrome, obsessive–compulsive disorder (OCD), and selective mutism, is now a 16-year-old leading a global movement of youth against the neglect of the climate crisis.

Greta’s voice has become the voice of environmental activists around the world, and she has been able to drive more than four million people around the world to go out to the streets. But behind the moving naivety, many are using this opportunity to promote their own agendas. This is how things work in the egoistic world we live in. Everything is calculated, interest-based, and pays off to someone at the end of the day. And even the colorful plaque Greta held in the empty squares of world capitals is also part of the campaign.

I have no claim against her or those behind her. Personally, I would have given her the Nobel Peace Prize, of which she is a candidate. After all, due to the positive messages generated from her green protest with a quarter of humanity, the world is beginning to agree that there is a serious problem here, that we can’t escape the forces of nature, that global warming is a result of mankind’s weakness, and that a great deal of the climate crisis is a direct and indirect consequence of humans.

Thus, two types of nature become clear: the globally interconnected nature and the egotistically disconnected nature, with zero interaction between the two. Also, human connections affect the relationship between all parts of nature, which is why we must first and foremost align ourselves with the laws of nature.

The entire ecosystem is integral, and the climate crisis plaguing humanity stems from human activity alone, from our attitude to the world. This is not the result of what things we do with our hands and legs, or what kind of food we put in our mouths. As long as our egoistic nature remains unrestrained and out of control, and no one in the UN really cares for the global ecological balance, except for the sake of appearance, we can say goodbye to planet Earth.

The fundamental solution that will bring us to balance with nature is strengthening positive human connections over the increasingly growing ego. The negative influence of separation between us permeates all the still, vegetative and animate levels of nature. As written by Kabbalists, “Man is a small world, the world is a great man.”

Therefore, dear Greta, the cure for treating the global phenomena begins our relationship with each other as human beings. If we genuinely cry together for social correction to happen, we will succeed. And in that, I am with you all the way. 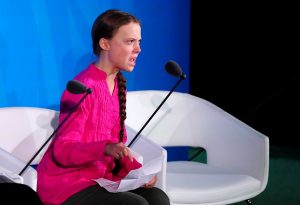 “How To Rise Above Time, Space And Motion And Communicate With The Dead” (Thrive Global)
Podcast Powered by podPress (v8.8)