Newsmax: “Trump’s Moves Better Suited To Our Interconnected Globe In Our Times” 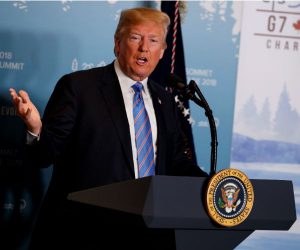 Last week, President Trump made another strategic move on the global chessboard. He officially announced that the U.S. is pulling back funding for the U.N. Relief and Works Agency (UNRWA) for Palestinian refugees.

Germany, in response to Trump, announced that it would significantly increase its aid to UNRWA. However, sooner or later, Germany would have to agree with the U.S. move.

To comprehend why, we need to see how Germany’s current modus operandi in these matters is leading it to a tipping point.

With the fall of Nazi Germany at the end of World War II, Germany’s national pride suffered a major blow. Since then, Germans have been very cautious about openly expressing their national pride.

Over the years, the German population shrank due to a low birth rate. There was a severe manpower shortage. In need of workers, Germany gradually opened its borders to let in migrants. In the beginning, Turks flocked in and were well-integrated into the German economy.

Over the years, however, many immigrants from Arab countries, including extremists, joined them with a single aspiration — to establish the Islamic caliphate on European soil.

As Muslims in Germany increased in numbers, the ethnic mix quickly tilted.

In recent years, Germany’s 70 years of repressed national pride is showing signs of bursting at the seams, most notably in the form of the Alternative for Germany (AfD) rightwing to far-right political party taking seats in the Bundestag.

With such a large influx of Muslim immigrants on one hand, and far-right political support gaining strength on the other hand, the stage has been set in Germany for oncoming civil unrest.

Today’s world is increasingly interconnected, not only economically and technologically, but also culturally. While on the surface, liberal ideologies that uphold equality and freedom sound positive for an interconnected world, a problem lurks within such ideologies.

We could enjoy equality and freedom if we successfully enhanced the quality of our connections, by raising the level of human awareness to relate positively to each other in such a state.

Until then, while no such education is implemented on any mass scale, then Trump’s approach of developing economic give and take relations between the U.S. and other countries serves to reinstate clearer and more practical relations.

As nations become more grounded in such relations, then the soil becomes more fertile to begin revising how we can start upgrading our attitudes to meet the challenges presented by today’s increasingly interconnected world.

Moreover, the way Trump makes his moves openly and stubbornly, in a completely opposite way to Obama, sparks a political-global disruption.

Not only is he shaking off ungrounded ideologies that have stuck to society and the global economy over the years, he is also putting a spoke in the wheels of a politically correct culture covering deepening injustices with a polite and respectful rhetoric.

Europe has been the first continent showing signs of following suit with this tendency.

Migrating From Negative to Positive Through Educational Programs

The way Trump has disrupted the global political and media landscapes has helped reveal the deep-seeded state of separation the world is in.

It is my hope, however, that this global and transparent process will be met with guided development in a positive direction as soon as possible, in the form of educational programs for unity and reconciliation of all divisions — within and between nations.

Read Newsmax: Trump’s Moves Better Suited to Our Interconnected Globe in Our Times | Newsmax.com
Urgent: Do you approve of Pres. Trump? Vote Here in Poll
[233080]

The Times Of Israel: “15 Rosh Hashanah Insights You Don’t Know About”