Let There Be Light

Every person’s soul is like a mirror reflecting sunlight.

A light beam descends, reflects off a soul, and withdraws into space.

Humankind, the civilization of egoists, is like a vast mirror array, reflecting light in different directions, making a sea of chaotic light.

However, merge the reflective light beams to be as segments of one immense parabolic source, and what do you have? At first, it looks like all beams are aimed differently, but as a whole, the light beams aim a common light at a common center. Their correct merger sparks a critical temperature, brings about a new substance – plasma – and bursts into flames. 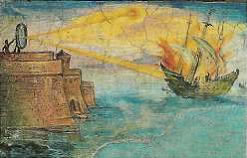 And this is how each person’s light arouses the fire of love among friends. Their unity with one another, together with their aim at a common goal, produces a new state that’s unimaginable and unreachable using our common sense: adhesion with the Creator, an ascent to the Creator’s level. Such a state is unimaginable prior to achieving it, because it’s created only when everyone unites.

According to legend, Archimedes also set enemy ships on fire by aiming polished bronze mirrors at them. His contemporaries were so stunned by this phenomenon that even today, thousands of years later, people still talk about it.

Are Kabbalists for War or for Peace?

An Invitation to Ascend – the Purpose of This Blog
Podcast Powered by podPress (v8.8)