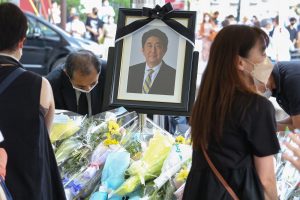 On Friday, two days before the elections for Japan’s upper house of parliament, Shinzo Abe, Japan’s former prime minister, was assassinated while making an election speech in support of a local candidate in the city of Nara. I regretted hearing about it. While not all his international initiatives proved successful, and despite lackluster success raising Japan from a prolonged economic slump, Abe was a good leader for Japan, for the world, and for Israel.

Abe had a positive influence on his country; he was positive for Israel and positive for the world. Although it is not immediately evident how he did this, he helped make the world more stable. This is why I regret his passing.

Japan is located (both geographically and politically) in between China, Russia, and America. These giant global forces surrounding Japan place it in a unique position to be a balancing element. Shinzo Abe understood it, felt it, and indeed strove to promote balance.

Although the US tried to pull Japan to its side in its struggle against China, Abe managed to maintain good relations with the US while not getting pulled into a battle that was not good for Japan. The Japanese people do not perceive China as an enemy, and Abe did not want to engender enmity between them.

China, too, has its own aspirations concerning influence in Japan. While not aspiring to impose itself on Japan as it is attempting to do in Taiwan, it still strives for influence. Here, too, Abe managed to run between the raindrops and keep Japan dry.

Abe had positive feelings about Israel. He felt that Israel has a special role in the world arena, and that it was worthwhile to maintain good relations with it. He was not only seeking economic or technological benefits from Japan’s warm relations with Israel; he truly felt that Israel has some sort of a parental role with regard to the world. This was the basis of his respect for Israel, and not a political or economic opportunist attitude.

In fact, leaders are generally more sensitive to the role of Israel in the world. Boris Johnson, too, had a keen sense for Israel’s significance in the world. Because statesmen engage in international relations, they sense that there is a certain code, a connection that ties all nations together, and that Israel plays a key role in that connection.

The death of Shinzo Abe, the forced resignation of Boris Johnson, the chaos in Sri Lanka, the never-ending cycle of elections in Israel, and the plummeting popularity of Joe Biden are only some examples of leadership in disarray, indicating that a global process is underway. I hope these changes lead to a positive change, as many governments and nations will have to decide where they are headed.

The world has to change. Humanity must ask itself where it wants to go. There are many points of conflict in the world, and we have to provide an inclusive answer to them.

If we can harness the global political turmoil to set off a profound transformation in our relationships, we will all benefit from the events. If we avoid making the changes now, we will be painfully forced to make them later. Either way, the world requires correction.
[300210]

“The Curse of Re-elections” (Times of Israel)