“In Memory of a Spiritual Giant”

This week, we will be commemorating the anniversary of the passing of one of the world’s greatest spiritual giants: Isaac Luria, known as “the holy ARI.” Although unknown to many, his writings form the basis of today’s wisdom of Kabbalah. It is thanks to him that Baal HaSulam was able to make the wisdom of Kabbalah accessible to the entire world in the 20th century.

The ARI was truly unique. Not only did he pass away at the early age of 38, but everything we have from him, volumes upon volumes of wisdom, he dictated to his disciple Rav Chaim Vital, who wrote down his every word, and he did it all within the final 18 months of his life.

The ARI took a wisdom that contains all the secrets of life, and stripped it from the countless stories and legends that enveloped it precisely in order to make it abstruse. He felt that in his generation, it was time to begin to reveal the true meaning of the hidden wisdom: the wisdom of Kabbalah.

When he first came to Safed, the city where he spent the final months of life, and where he taught his disciples, no one recognized his greatness. At that time, the greatest Kabbalist was RAMAK, and the ARI also went to learn from him.

But when RAMAK, a great Kabbalist in his own right, realized the greatness of the ARI, he praised him publicly in the highest terms so everyone would recognize his greatness: “Know that there is one man who is sitting here,” he said about the ARI, “who will rise after me and enlighten the eyes of the generation in the wisdom of Kabbalah. For in my days, the channels were blocked, and in his days, the channels will be revealed. Know that he is a great man, a spark of Rabbi Shimon Bar Yochai.”

By saying that the ARI was connected to Rabbi Shimon, author of The Book of Zohar, the seminal book in the wisdom of Kabbalah, RAMAK was actually saying that all the words of the ARI are true and holy, and that anyone who wishes to learn the authentic wisdom should study with him.

It took many years, even centuries, for the great wisdom of the ARI to become known, but today we know that were it not for Lurianic Kabbalah, which is named after him, the secrets of the wisdom of connection, namely the wisdom of Kabbalah, would still be concealed from us.

Thanks to the teaching that the ARI had founded, and which Baal HaSulam interpreted for us, we know how humanity should live, how to build a sustainable society where people care for one another and practice mutual responsibility.

In today’s tumultuous times, it is the great wisdom of the ARI, wrapped in the commentaries of Baal HaSulam, that enables us to make sense of things and find our way in the growing confusion of humanity. Through their wisdom, if we want to, we will sail safe through the troubled water. 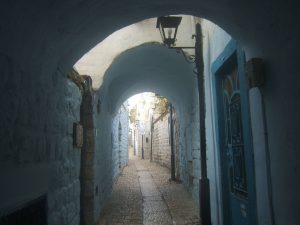 “The One Thing AI Cannot Give” (Linkedin)