My new article on Linkedin “Europe Supports Terrorism against Israel” 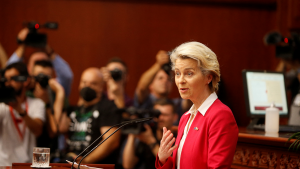 Less than a year ago, Israel presented evidence that the Palestinian organization Al-Haq is a terror supporting organization. As a result, the European Union cut off funding to the organization. A week ago, the EU suddenly announced that it had found no evidence to support Israel’s argument and announced that it would resume funding. Shortly after, nine European countries issued a joint statement that they, too, will resume funding of Al-Haq and other organizations that support Palestinian terrorism against Israel, claiming that Israel had presented no evidence to support its claim.

At the same time, the Israeli organization NGO Monitor said that it did provide European governments ample proof that these organizations finance or otherwise support terrorist activities. The organization decried the countries’ “deliberate ignoring of materials presented to them for years.”

I have no doubt that the organizations that Israel pointed out do support terrorists and terrorism. However, I am just as confident that trying to get the EU or its countries to stop funding them is utterly pointless. The simple truth is that the EU, as an organization, and the member states of the EU, support these Palestinian organizations because they, too, want to revoke the State of Israel.

We can complain to them and we can protest, but as long as we do not advance the one thing we must advance—our internal cohesion—and present it to the world as an example of unity, we will not see any favorable approach toward Israel.

Currently we are setting an example of division. Accordingly, the entire world is uniting against us and with our enemies.

If we are divided, the world wants not only to revoke Israel, but to wipe the Jews off the face of the earth. There is no in-between here; it is either or.

By “unity,” I am not referring to unity with Israel’s enemies against adversaries from our own folk. This does not show the world that we are united, but rather emphasizes our division and increases the world’s hatred toward us. By “unity,” I mean uniting with our own people despite the chasm of views between us, and without erasing it, so as to show what we are overcoming. This will give the nations the example they need in order to begin to unite among themselves, and they will thank us for it.

We need not be afraid of criticism. We must be confident that all we need is to be a light to the nations—an example of solidarity, mutual responsibility and love of others. If we do this, the world will cherish us and thank us.

The world unites with us when we unite with one another, and unites against us when we turn against each other, as is happening now. Our success, therefore, depends entirely on the connection between us. If we nurture our unity, we will thrive. If we do not, the world will see our existence as redundant and disruptive, and will seek to do away with us.

Through the connection between us, we determine where the world’s forces will go. When we are united, the world directs its energy toward connection and everyone enjoys the benefits of unity. When we are divided, the forces of the world turn against each other, wars and destruction ensue, and the whole world blames us for it. This is the simple equation of our lives.

For more on the link between Jewish unity and antisemitism, read my publications The Jewish Choice: Unity or Anti-Semitism, Historical facts on anti-Semitism as a reflection of Jewish social discord, and Like a Bundle of Reeds: Why unity and mutual guarantee are today’s call of the hour.
[300414]

“How will society improve in the future?” (Quora)