“Taking The Fear Where It Should Go” (Linkedin) 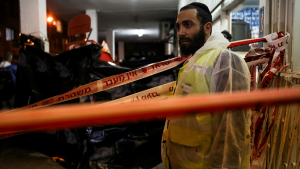 At such times, when people are afraid to walk out of the house, to go to work, or to take the kids to school, we should remember that there is a purpose for the fear: to bind us all together. If we direct our fear toward unity, it will vanish along with its cause.

It may not feel this way, certainly not in times of strife and terror, but humanity is one entity. Our ancestors, led by Abraham, felt it and formed a nation that accepted into its midst anyone who subscribed to the principle of unity and love above all differences and hatred. King Solomon canonized this principle in the verse (Proverbs, 10:12), “Hate stirs strife, and love will cover all crimes.”

Indeed, unity had been our primary tenet from the very beginning. We were pronounced a nation only after we agreed to unite “as one man with one heart.” Immediately thereafter, we were tasked with setting an example of unity to the rest of the world, namely with being “a light unto nations.”

Because of our unique calling, our success or failure has always depended on our unity or lack thereof. Our sages throughout the ages have repeatedly stressed this point. The book Maor VaShemesh asserts, “The prime defense against calamity is love and unity. When there are love, unity, and friendship between each other in Israel, no calamity can come over them. … [If] there is bonding among them, and no separation of hearts, they have peace and quiet … and all the curses and suffering are removed by that [unity].” The book Maor Eynaim echoes these words: “When one includes oneself with all of Israel and unity is made … at that time, no harm shall come to you,” as does the book Shem MiShmuel: “When [Israel] are as one man with one heart, they are as a fortified wall against the forces of evil.”

The book Maor VaShemesh asserts, “The prime defense against calamity is love and unity. When there are love, unity, and friendship between each other in Israel, no calamity can come over them.

Therefore, while we must do all that we can to protect ourselves and our families on the military level, we must work equally hard on our unity, as the lack of it is the root cause of our problems. When we achieve this, we will bring lasting peace to ourselves, and to the entire world, which is, as Rav Kook said, “crumbled by the dreadful storms of blood-filled swords.”

You will find more on the connection between Jewish unity and peace in my book The Jewish Choice: Unity or Anti-Semitism.

“Why Do Large Sectors Of Humanity Sometimes Get Hit By Major Blows Of Suffering, Like Natural Disasters And Wars?” (Quora)
Podcast Powered by podPress (v8.8)