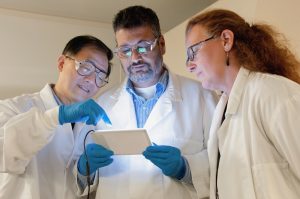 Scientists at Tel-Aviv University (TAU) reported that they have developed a new way to deliver drugs directly to cancer cells rather than dispersing them throughout the body. According to the magazine Science Daily, “The study opens a new path to a personalized and precisely targeted battle against cancer.” Prof. Dan Peer, head of the research team, stated that their aim was “to silence the enzyme HO1 which enables tumors to develop resistance to chemotherapy, and ‎to conceal themselves from the immune system. …Our new nanodrug,” he asserts, “knows how to ‎precisely target the cancer cells, silence the enzyme, and expose the tumor to chemotherapy, ‎without causing any damage to surrounding healthy cells.” I am all for advanced medicine, but medicine cannot cure the cause of cancer, and without curing the cause, it is like sealing one leak in a pipe only to find that we have created a new one instead.

Cancer is a unique disease. It develops when cells begin to consume their environment and grow at its expense. Eventually, cancer brings on itself its own death by killing the body that sustains it, but it cannot help itself.

That “selfish” behavior of tumors is very similar to the way we are behaving toward each other and toward the environment. Although we are dependent on both for our survival, our attitude toward them is opportunistic and abusive, yet we cannot help ourselves. In that sense, humans are the cancer of the earth.

While it is not that the more selfish one is, the more likely one is to develop cancer, the increasing prevalence of cancer in human society as a whole is a result of our increasingly exploitative attitude toward Earth and toward each other. Just as kind and generous people, or even little children, may develop cancer, the effects of humanity’s abusive attitude can manifest in parts of the world that are not particularly exploitative. There is mutual responsibility here: Just as the entire organism suffers when one organ becomes sick, all of humanity suffers when its overall attitude becomes sick, namely abusive.

Cancer is not the only outgrowth of our abusiveness. Basically, so are all of our diseases. However, cancer is the most striking case of a “selfish” disease, since the way it operates is so similar to the way we are behaving toward each other, toward animals and plants, and toward Earth as a whole.

Because cancer is an “egoistic” illness, the only cure for it is to cure our egoism. Eliminating cancer, therefore, requires uprooting egoism from our society.

Clearly, this is an educational process and not a medical one, but we will feel its benefits in every aspect of our lives. Education toward reciprocity and consideration will not only benefit our health, but our economy, the safety of our society, the level of drug abuse and drug-related crime, and our overall standard of living and well-being.

Even if we cannot see an overt connection between cancer and selfishness, eliminating the latter is clearly a worthwhile goal. Therefore, I would suggest that we try it first, and when we see the results, we will not want to stop.
[297081]

“What If Iran Has A Bomb” (Times Of Israel)

“Could There Be A Second Holocaust?” (Times Of Israel)
Podcast Powered by podPress (v8.8)