“Chip Crisis Chipping Away At Our Delusions Of Independence” (Medium) 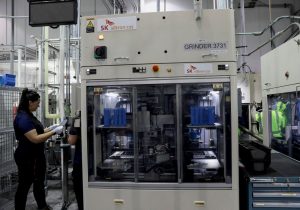 The production area of SK Siltron CSS, a silicon wafer plant being expanded by South Korean semiconductor manufacturer is seen in Auburn, Michigan

Despite trying to resume normalcy after two years of intermittent lockdowns and vaccine and mask mandates, reality seems to have different ideas for humanity. The latest is a shortage in those silicon chips called “semiconductors,” which operate not only computers, but most everything that modern civilization uses. The semiconductor crisis, aka the “chip crisis,” has become a threat to the global economy and a menace to the stability of society. Since we did not want to learn over the past two years, now a new threat will show us that unless we strive to connect with one another positively, we will seriously hamper, if not altogether lose our comfortable way of life.

At his car dealership in Stoke-on-Trent, England, Umesh Samani, who is also the chairman of the Independent Motor Dealers Association, laments the computer chip shortage. He tells the BBC that all his customer wants is a white, standard model, manual transmission VW Golf, but Samani cannot say when it will arrive.‎ It could be many months, or he fears even a year until delivery. According to Mr. Samani, manufacturers often tell him the computer chip shortage is to blame.

The chip crisis is hurting everyone. According to Reuters, “The White House held a classified briefing … with some U.S. lawmakers on the dire risks to the American economy from semiconductor supply chain issues as it pushes Congress for $52 billion in funding to subsidize production. White House National Economic Council Director Brian Deese told reporters ‘The best estimates are the lack of available semiconductors probably took a full percentage point off of GDP in 2021.’”

Worse yet, the trajectory is negative. “Russia’s war in Ukraine could see the production of neon, a critical gas in advanced ‎semiconductor manufacturing, fall to worryingly low levels at a time when the world is ‎already grappling with a chip shortage,” reports CNBC. At the same time, there are those for whom the crisis is a serendipity. McKinsey & Company, for example, one of the largest consulting firms in the world, explains on its site how “semiconductor companies can take different paths to capture new opportunities as demand ‎continues to outstrip supply.”

McKinsey’s approach is the traditional capitalistic approach. Yet, what had worked for decades is not working anymore. The lesson we should learn from the multiple concurrent crises is that we must wake up fast from our delusions of independence, as we are totally interconnected and interdependent.

It is not new. We have been connected and dependent on each other for many decades now. The difference is that until recently, we could pretend as though we weren’t and get away with it. We fought against each other on every possible level: physical, economical, political, and social. At the same time, we traded with each other as if there were no struggles and no rivalries.

Today, however, the dog-eat-dog attitude has chipped away at our ability to maintain systems running. Just as denying vaccines from those who could not afford them caused mutations to spread around the world, denying semiconductor chips from other countries, either by a sales ban or by destroying plants or the supply chain of vital minerals, will backfire on anyone who employs such tactics.

Chips are essential for anything from microwaves to supercomputers. Without them, we will not be able to grow or cook food, manufacture new cars, use elevators to get to our apartments, build life-saving medical devices, computers, and planes and rockets. In short, chips are simply too critical to be able to allow any one country to deny them of others.

When we become too selfish, we throw the system off balance. Instead of wishing to support one another and benefit from each other’s success, we strive to dominate and oppress one another. When we become like that, every means is fair game.

This is learning nature’s way, the way of pain and suffering. We can learn of our interdependence and its resulting obligation to cooperate and form a balanced society by teaching ourselves. If we accept the inexorable fact of our mutual dependence, we will learn to work with it in a way that truly benefits everyone, and not only the most powerful, while the rest of humanity groans in pain and seeks to overthrow them in a revolution that will only increase the suffering of humanity.
[296822]

“Passover And The Israeli Society” (Times Of Israel)