“Where Is Our Survival Instinct?” (Linkedin)

My new article on Linkedin “Where Is Our Survival Instinct?” 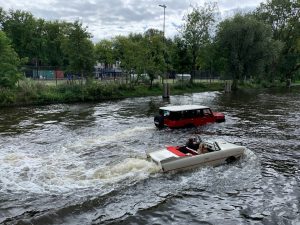 With humans, things get a little trickier. We want to survive, but we also want to dominate, to rule. In many cases, we want it more than life itself. Think of the risks people take for fame, how they risk themselves and (mainly) others in the battlefield, and you will see that for humans, life comes second when fame or power are concerned. We use any opportunity to trample them on our way to the top of the heap. When a common danger threatens people, there will always be those who take advantage of the fact that people are busy fleeing from the danger and are unaware of the danger lurking for them from other people.

It does not have to be a physical danger. People may take advantage of natural disasters to make a fortune out of other people’s misery. Even in the midst of this pandemic, countries and corporations are taking advantage of their technological and economic powers to profiteer at the expense of others. It is obvious that this attitude will turn against them, since any place where the virus can spread will eventually become a source of a new strain, but governments cannot see beyond their immediate profit, and all of us suffer as a result.

This callous exploitation is human nature, and the sooner we acknowledge it, the sooner we can begin to change it. If we don’t, the future blows, the outcomes of our misconduct toward each other, will still teach us how to be considerate, but the lessons will be far more painful and costly both economically, and in human lives.

Either way, we will eventually learn that in a connected reality, where everyone depends on everyone else, nothing can be more senseless than to act selfishly. Our sages, who realized that we are interdependent thousands of years ago, wrote about it in the Jerusalem Talmud. In Masechet Nedarim (9:4) they write, “[Suppose] one is cutting meat, and the knife descends into his hand; would he consider avenging his hand and cutting his other hand for cutting the first? So is this matter … the rule is that one does not take revenge against one’s neighbor, for it is as though he is taking revenge against his own body.”
[285359]

A Meal—Receiving The Upper Abundance

“Why Is So Much Of The World’s Food Bad In Quality?” (Quora)
Podcast Powered by podPress (v8.8)