My new article on Linkedin “Tu B’Av, More Than a Jewish Valentine’s Day” 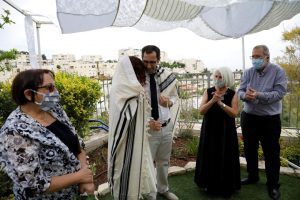 How is it possible that love is the motive of almost every activity people engage in, and yet, what we see around us is endless hatred, separation, and quarrels? Let’s rethink what true love is.

The best explanation of this concept can be found in the meaning of Tu B’Av (the 15th of Av), the day of love. It happens right after Tisha B’Av (the 9th of Av), the day of destruction. Only after this unparalleled crisis where evil is revealed, the hatred between us, are we able to correct ourselves and reach true love. Then a new period of balance begins. In order to attain it, however, we needed first to recognize that our present state is completely opposite to it.

In other words, the recognition of an unfounded hatred that dwells in our heart is the precondition for the attainment of unconditional love between us. As it is written, “Tu B’Av is the correction and mitigation of Tisha B’Av.” (Likutey Halachot).

It is also written in the Mishnah, “No day was as good for Israel as the 15th of Av—a day when the tribes were permitted to mingle and impart each one’s goodness to one’s friend.” (Tifferet Shlomo)

Tu B’Av was the greatest of days when, according to tradition, the young women of Jerusalem would go out dressed in white to the orchards and vineyards to sing. The young men would join them to choose their bride. These are the images that characterize this holiday.

In spite of the romantic imagery, it is not the earthy love of young men and women in the vineyards that Tu B’Av speaks of, but a totally different kind of love: one built atop the egoism (self-interest instead of concern for the wellbeing of others) that destroyed the First and Second Temples on the 9th of Av, which we have just finished commemorating. The dark days between the 17th of Tammuz and Tisha B’Av remind the Jewish people of the destruction of the two Temples, as well as other problems and afflictions that we have undergone. Later on, when the unfounded hatred is gone, a new period begins during which we search for correction.

We search for a spiritual partner to help us accomplish this transition we desire, and the spiritual partner for both men and women is the higher force of love and bestowal, the Creator. We connect with Him and together receive absolute fulfillment, the pleasure and enlightenment—the revelation of the real world—existing in that sublime and whole reality and not only in the tiny fragment of it that we know as our world. The entire process of the Tu B’Av unification symbolizes our ultimate correction, the rebuilding of the Temple, and our transformation from hatred to love.

Therefore, the festivity of Tu B’Av alludes to the time in which we will build the Third Temple. However, the allusion does not refer to a physical edification but one we build in our hearts, between us. It speaks of a state in which humanity is connected positively, and in which the unifying force that maintains the world and all reality becomes revealed between us.

What is true love? True love, not the love on the corporeal level that we usually think of, is a special feeling of connection between us which elevates us to the heights of eternity, wholeness, and an infinite expansion of our feelings and thoughts. We begin to sense that we exist in total fulfillment when we relate to one another with this ultimate love.

In our current state, even when we feel we love someone, it is because we love how that person makes us feel. As a result, we stop loving when we derive no joy from the relationship, so in truth, there was actually no true love there to begin with. To truly love another means to only want that person’s happiness, to want to give to that other person.

However, there is one special condition required before we can achieve true love. Love unfolds only after first revealing a state of fragmentation— the present state—and then collecting all the shattered pieces together in a spirit of mutual concern and reciprocity.

The new state of consciousness, this new understanding and feeling, elevates us to the higher level of the perfect reality above the limitations of our earthly life. Tu B’Av propels us to the unique state of “Love your neighbor as yourself.”
[285266]

“What Should I Do To Stop Feeling Despair?” (Quora)