“The Power Of The Force Of Separation” (Linkedin) 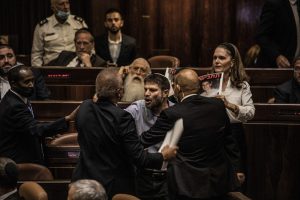 These days, Jews are commemorating the Three Weeks. In the year 70 CE, the Romans breached the walls of Jerusalem after a several months long siege. However, it took them three weeks of bloody battles to finally defeat the Jews, destroy the Temple, and exile the residents of Judah from the land of Israel, thus ending Jewish sovereignty over the land of Israel for the next two millennia. In those days, the Romans defeated the Jews mainly because of in-fighting among the Jews, and less thanks to the military superiority of the Romans. When Jews commemorate these days, they lament the unfounded hatred that had conquered their hearts and defeated their nation.

Today, it is evident that the same force of separation that prevailed then still prevails now. We have been given the land back, but not thanks to our unity, but because of the world’s pity on us after the atrocities of the Holocaust. Yet, separation still rules our hearts, and unless we overcome it, it will destroy us once again. The Jerusalem Talmud writes about it very clearly (Yoma 1:1): “Any generation in which the Temple is not built, it is as though in those days it was ruined, for it was not built due to unfounded hatred, which is as though it is ruined, as this was the reason for its ruin.”

These somber weeks—and especially their beginning on the 13th of the Hebrew month of Tammuz, when the Romans first breached the walls, and their conclusion, on the 9th of the Hebrew month of Av, when the Second (and first, by the way) Temple was ruined—should be days of introspection for us. Mere bewailing the ruin of the Temple will not do us any good. Victimhood is a treacherous bait, and we must avoid it at all cost. We must take a proactive approach and reflect on the reason for its ruin, on our hatred for each other. Only if we realize that this was the cause of our downfall, we will be able to prevent its recurrence.

Since the beginning of our exile after the ruin, we have adopted the attitude of the helpless victim. Yet, if you read what our sages, the spiritual leaders of our nation, wrote about the same events that we regard as calamities we could not avoid, you will find a very different viewpoint.

Considering the ruin of the First Temple, for example, which we attribute to the Babylonian king, Nebuchadnezzar II, our sages actually attribute it to internal conflicts. The Babylonian Talmud (Yoma 9b) describes the leaders of the Israelites in the following pejorative manner: “Rabbi Elazar said, ‘Those people, who eat and drink with one another, stab each other with the daggers in their tongues.’ Thus, even though they were close to one another, they were filled with hatred for each other.” The Talmud also emphasizes that “the hatred was only among the leaders of the nation, while the majority of Israel did not hate one another.” As we saw before, by the time of the ruin of the Second Temple, the hatred had spread to the entire nation, and we have not recovered from it since.

Today, the force of separation still reigns supreme. One look at what is happening in Israeli politics immediately brings to mind the events leading to the ruin of the First Temple. In fact, some pundits have even found similarity to the events leading to the fall of the Second Temple. Since Israeli politics reflects the state of the Israeli society, currently, we have no reason for optimism.

The bottom line is that we are treading the same ruinous path as our forefathers. If we do not veer off from hatred, we will find ourselves succumbing to yet another “villain,” who will be just like the rest of the villains that have tormented the people of Israel throughout the ages: a consequence of our own mutual malice.

The nations look to us for leadership. And just as every IDF commander learns, one leads by example, and by nothing else. If we do not set an example of unity, the nations will revoke our right to this land. We think this land is undeniably ours, but it is ours only if we are Israel: united “as one man with one heart.” If we are like the rest of the nations, then we are not Israel and we have no right to sovereignty over this land.

The forces of separation are gnawing at our ranks and weakening our power. We are strong only when we are united because then we are Israel, “a light unto nations.” When we do not strive to love each other as ourselves, however difficult it may be, then we have no justification being regarded as Israel, and therefore no right to the land of Israel.