“No Safe Haven For Diaspora Jews But Israel” (Linkedin) 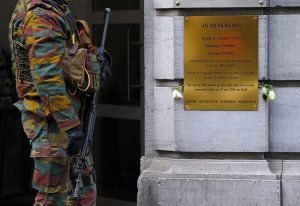 About the prospect of raising his Jewish family in Belgium: “I believed I could. Now I doubt I can,” wrote Joel Rubinfeld, president of the Belgian League Against Antisemitism, in an op-ed published in a local newspaper. This sentiment is increasingly common in Europe and the United States alike. Despite the rise in antisemitism in Belgium, the government there decided to remove military security from Jewish institutions. Now without state protection, the Jewish community is asking for help from Israel. This or any other security scheme would be useless until they realize where Jews can really find a safe haven and their role.

Should the State of Israel intervene in the security situations of the Jewish communities in the Diaspora? Absolutely not. Today it is Belgium, tomorrow it will be another country in Europe or elsewhere. The State of Israel must urge Jews living abroad to fend for themselves and should not become involved in trying to safeguard the Jews in other countries against antisemitism.

The Jews in Belgium are not so poor as to lack the means to maintain security around themselves, so why do they demand the State of Israel to do so? Why should Israeli money fund security services to guard them so that they can live comfortably in Belgium? I am definitely opposed to the Jews in Israel taking responsibility for the Jews of Belgium and the Jews of the Diaspora in general. We have no interest in keeping them there.

Even if the Jews decide to move from Belgium to another country where they feel safer, they will have to learn firsthand that the place for Jews is the Land of Israel. Beyond Jews realizing that they have a state and a homeland here in Israel, they must decide on their own to return to fulfill the exalted role of the Jewish nation—to create a model society of love that covers any hatred that might reveals itself within it, a society of mutual guarantee in accordance with the laws of the Supreme Power.

The phenomenon of antisemitism is revealed in the world as a natural response designed to remind the people of Israel why it exists in the world. Our only option and shield for defending ourselves against hatred is the implementation of our role as “light unto the nations.”

Therefore, the solidarity we feel with the Jews of Belgium should not be expressed by rushing to invest our money in safeguarding their institutions—a move that would be futile—but by explaining, both to ourselves and to them, the cause of the animosity against Jews, and what we must do to fix the problem for the world and ourselves.

If we do not start moving towards carrying out our role, we will find ourselves with no place to hide. As it is written, “The Day of Judgment will not come about until Muslims fight the Jews, when the Jew will hide behind stones and trees and the stones and trees will say, ‘O Muslim, O Abdulla, there is a Jew behind me, come and kill him.” (First extract, “The Victory of Muslims Over Jews,” Hadiths)

Our Jewish sources say that eventually all the Jews, including the Ten Tribes we lost along the way, will return to the Land of Israel to unite. Although there seems to be no place to absorb them all, there is plenty of room.

The Book of Daniel calls the Land of Israel the “land of the deer.” As the Talmud explains, “Just as the hide of the deer has the capacity to encompass its body, but shrinks when separated from its flesh, so too can the Land of Israel expand to encompass its rightful inhabitants but shrinks when we are exiled from it.” As in this allegory, in the same way that the deer is able to expand its skin, accordingly we can expand our hearts to be as one, a safety net for the Jewish people and for peace in the world.
[284581]

“How Do We Stop Our Governments From Starting A New War?” (Quora)