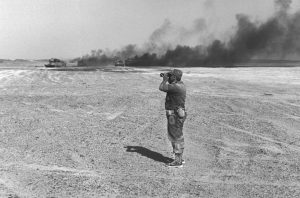 The Palestinian-Israeli conflict, or as it was previously known, the Arab-Israeli conflict, is widely considered as the source of all the problems in the Middle-East. Over the past century or so, this conflict has inflicted tens of thousands of casualties on both sides, and tremendous suffering of countless innocent people. The sad thing about it is that the conflict is needless. If the two peoples acted according to their roots, there would be no conflict whatsoever, and the area would be a role model of amity.

In our roots, Jews and Arabs aren’t that far. We both come from the same father, Abraham, who taught us all the same law: the law of mercy and kindness. Abraham taught us that nature consists of one force that moves the stars in the sky and “rules the capital,” as Maimonides put it. Abraham taught us that that force is one of love and giving, and this is why he taught his disciples to love and give, as well, so they would be like nature.

The conflict began once we abandoned the principle of love and giving and gave in to the power of the ego. Once the ego has set in, religions took over where simple love once ruled. Religions thrive on separation and distinction; they set apart Jews, Christians, and Arabs, and then continue to separate them into countless sects and factions. Since the ego wants to be the king, it cannot tolerate connection and bonding. When it cannot be the sole ruler, it finds “flaws” in others, which justify parting from them. This is how new religions form.

It is true that people need traditions and cultures; it is very human and serves positive roles in people’s lives. As such, religion is not at all negative. However, when it drives people away from one another, presents others as enemies simply for wearing a different kind of clothing or for praying to the same force in a different way, then religion becomes a source of conflict and hate, and anything that increases hatred among people is negative.

Despite the apparent deadlock, I see the solution as easy, as long as people do not try to annihilate others or force their ways of life on them. To establish peace, all that people need is to consider that the one force that guides our world is good and does good, and if we want to be close to it, we should try to be likewise.

An approach of love and giving never reproaches or delegitimizes other people. Each one should live according to one’s own culture and tradition. All that we need is to add another layer, a coating of love over our diversity, above our different approaches to life. If we remember that we all have the same father, who wanted us all to have the same things, to attain what he had attained, and spread what he had discovered to the whole world, I think it will be only natural to lead a peaceful and harmonious life here in our tormented piece of land, and leave our bloody history behind, for good.
[284371]

“Why Is Human Life Considered The Most Important Than The Rest Of The Life Forms?” (Quora)