“Where Do We Go From Here?” (Linkedin)

My new article on Linkedin “Where Do We Go From Here?” 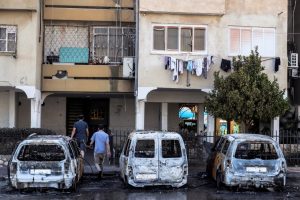 We haven’t even recovered from Covid-19, and already, we are at war with our neighbors. And this time, it is not only with our neighbors across the Gazan border, but literally with our next door neighbors: Israeli Arabs who have been living peacefully with Israelis for more than five decades. In fact, most of the youngsters rioting now have never known anything but peaceful living alongside Israelis. They work in Israel, with Israeli Jews, went to Israeli universities with Israeli Jews, and send their representatives to the Israeli parliament, the Knesset. Yet, now they are rioting against Jews, raising flags of Palestine, where they do not want to live, and burning the Israeli flag, where they do want to live. They are lynching, shooting, and stoning Jews, burning Jewish owned shops, synagogues, and cars, and they are chanting “Death to the Jews.”

From day to day, our hatred for each other is growing more intense and venomous. Accordingly, the passion of our neighbors to throw us out of here is proportionally intensifying. The equation is clear and simple; we just have to be honest enough to see it: When we hate each other, they hate us; when we want to destroy each other (as we did in the Second Temple), they want to destroy us.

To us, Jews, this is a major shock. Most Israelis did not imagine that this was how their Arab neighbors felt about them. The situation calls for some serious reckoning. We need to contemplate where to go from here, and why we are here in the first place. No other nation needs to ask these questions, but we, Jews, must. Because if we cannot explain to ourselves, and even more important, to the world(!), why we exist, and why specifically here in Israel, then we will have no moral right to be here, or to be at all.

Telling ourselves that we are here because we needed to save ourselves from antisemitism in the wake of the Holocaust is not the answer. Already, the nations regret voting in favor of establishing a Jewish state in Palestine in November 1947. They haven’t decided to reverse that decision, yet, but if they had to vote on it again, they would vote overwhelmingly against the whole idea.

So, what should we do? We must remind ourselves that we are here not to build a shelter from antisemitism, but to reestablish our peoplehood. We became a nation at the foot of Mt. Sinai, when we pledged to unite “as one man with one heart,” and we were immediately tasked with passing on that unity to the rest of the world, or as the Torah phrases it, with being “a light unto nations.” This is why Old Hillel told the man who asked him what it meant to be a Jew, “That which you hate, do not do unto your neighbor; this is the whole of the Torah, and the rest is commentary” (Shabbat, 31a). This is also why Rabbi Akiva, whose disciples wrote both the Mishnah and The Book of Zohar, said that “Love your neighbor as yourself” is the principal law of the Torah (Jerusalem Talmud, Nedarim, 30b). We should ask ourselves if we are keeping this law, because if we aren’t, then we don’t deserve to be here.

I think the truth is evident. From day to day, our hatred for each other is growing more intense and venomous. Accordingly, the passion of our neighbors to throw us out of here is proportionally intensifying. The equation is clear and simple; we just have to be honest enough to see it: When we hate each other, they hate us; when we want to destroy each other (as we did in the Second Temple), they want to destroy us.

But the opposite is just as true: When we love each other, they love us. We determine our fate by determining how we relate to one another. I don’t know where we will go from here, but I do know what we need to do if we want to go anywhere good: We need to start developing love for one another. The harder we work on this, the faster our situation will improve.
[282348]
[Image: People walk next to burnt vehicles as they enter a building after violent confrontations in the city of Lod, Israel between Israeli Arab demonstrators and police, amid high tensions over hostilities between Israel and Gaza militants and tensions in Jerusalem May 12, 2021. REUTERS/Ronen Zvulun]

What Is Talent Given For?
Podcast Powered by podPress (v8.8)