“The Rockets Expose The Myth Of Coexistence” (Linkedin) 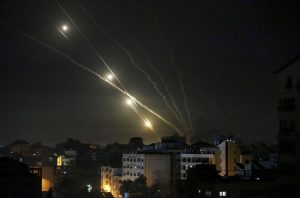 The good thing about crises is that they expose the truth. After the Israeli War of Independence, Arabs remained in many places in Israel and became Israeli citizens. Over the years, it seemed as though we’ve learned to live together in peaceful coexistence. It was clear that there is no love between the two populations, and that the Israeli Arabs sympathized with the Palestinians in the West Bank, but they still chose to remain in Israel and lead a full civic life here, work alongside Israelis, trade with Israelis, and benefit from the amenities of a prosperous economy. For many years, it seemed as though the hatred that flared during the War of Independence had subsided thanks to the frequent contact with Israeli Jews. It was a myth. The rockets from Gaza and the riots in Jerusalem exposed the truth: Israeli Arabs identify themselves as Palestinians, and they only waited for a time when the Jewish society in Israel was divided and weak enough for them to expose that they, too, want the destruction of the State of Israel and the establishment of a Palestinian state from the Jordan river to the Mediterranean sea. For some reason, we enjoy lying to ourselves. We cannot afford this luxury; we should tell ourselves the truth: Nothing has changed since the establishment of the State of Israel. The Arabs, who supported the Nazis in World War II, are just as keen to destroy us now as they have always been.

“The Israeli nation had been constructed as a sort of gateway by which sparks of purity would flow onto the entire human race throughout the world,” to use the words of kabbalist Baal HaSulam. This purity, this unity above the ego, is the meaning of being “a light unto nations.”

We have to understand what Israel stands for in the world. The nation of Israel was “officiated” when descendants of strangers who were often hateful toward each other chose to unite above their enmity. By doing so, under the leadership of Abraham and his lineage, and finally under Moses, they set a precedent showing how people can overcome their egos and unite. “The Israeli nation had been constructed as a sort of gateway by which sparks of purity would flow onto the entire human race throughout the world,” to use the words of kabbalist Baal HaSulam. This purity, this unity above the ego, is the meaning of being “a light unto nations.”

But since human nature is selfish to the core, or as the Torah puts it, “The inclination of a man’s heart is evil from his youth” (Gen. 8:21), Israel’s method of achieving peace among sworn enemies has put it on a collision course with the rest of humanity. In truth, no division is greater or deeper than the division between Israel and the rest of the world, and no hatred is more intense. The chasm between Israel and the nations is a projection of the chasm between the nature of giving and unity and the nature of receiving and selfishness. There is no compromise; in the end, only one will remain.

When Israel are united, they are powerful enough to deter any enemy. In fact, a united people of Israel has no enemies since the light of unity it emits attracts the nations toward it to learn how they, too, can unite. The book Sifrey Devarim (Item 354) writes that in antiquity, in times when Israel were united, people from the nations of the world would “go up to Jerusalem and see Israel … and say, ‘It is becoming to cling only to this nation.’”

Alas, today we are anything but united. And when we are disunited, we are powerless, and the world feels our weakness and wishes to seize the moment and destroy us. When we are disconnected from our unity, our anchor of strength, the ego takes over the world and wishes to destroy its only enemy: the people of Israel. “Israel will be a holy congregation and one association, as one man with one heart. Then, when unity restores Israel as before, Satan will have no place in which to place error and external forces,” writes the book Shem MiShmuel. “When they are as one man with one heart,” it continues, “they are as a fortified wall against the forces of evil.” However, “If there is division among them,” writes the book Masechet Derech Eretz Zutah, “it is said about them (Hosea 10:2), ‘Their heart is divided; now they will bear their guilt.’”

This is what is happening today. We are suffering the consequences of the baseless hatred among us, and the whip is our neighbors. Our own disunity is the instigator of their violence, and the only fire extinguisher we have is our solidarity, our care for one another. If we can rise above the chasms in the Israeli society, we will prosper more than any other nation. If we do not, we will bear our guilt.

“What Is The Role Of The Ten Commandments Today?” (Quora)